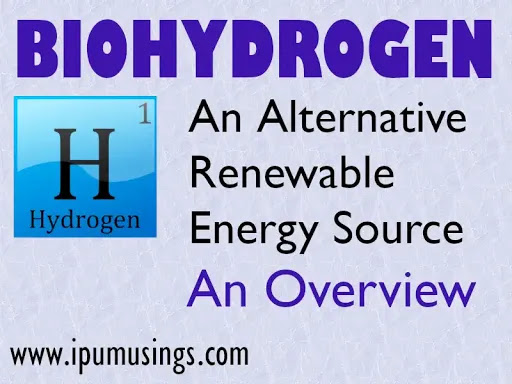 There are varied non-renewable sources of energy like coal, fossil fuel, nuclear, oil and fossil fuel product. More than eighty-fifth per cent of total energy desires of the world is consummated by these non-renewable energy sources. These non-renewable sources of energy are used extensively due to economic feasibleness of extraction, purification and transportation as compared to their alternate renewable, clean fuels. Not solely these sources are in restricted stock, however, their huge consumption is the major reason behind environmental issues, most ordinarily because of the emission of greenhouse gases and land & soil pollution caused by mining. Consistent with the reference of Encyclopedia of ecology, 2008 by L. Hens, L. X. Quynh, the coal reservoirs are sufficient till 2170 at 2004 production rates. However, if we have a tendency to think about oil and fossil fuel, their availableness is way additional restricted. they're calculable to last solely until 2041 and 2071, severally.

Therefore within the current situation of ceaselessly increasing demand for energy but depleting non-renewable energy reservoirs there's a pressing urge to interchange these sources by renewable energy sources. These renewable energy sources not only the answer for the world's ever-growing energy demand but also provide with sustainable development, taking environmental well being into consideration. Major renewable energy sources are biodiesel, hydrogen, ethanol, biohydrogen, heat energy, hydropower, solar power, wind energy. In truth, one study shows that heat generated from renewable energy can expand by the fifth part between 2019 and 2024.
If we consider particularly hydrogen as a source of energy, it is a very promising renewable source of energy. One gram of hydrogen gas generates 122 kJ of energy which is 3 times the energy derived from gasoline. It is much clear energy source as compared to conventional fuels. It does not produce acid rain ingredients, pollutants, greenhouse gases hence has no ozone depletion effect. Therefore not harmful for biodiversity with high utilization efficiency conserving resources and abundant energy for economic development. Hydrogen is abundant in a bounded form in nature(75%). The general energy extraction processes from hydrogen are in themselves energy-intensive.
The various chemical and electrolysis processes involved in hydrogen production are:
• Miscellaneous novel gasification
• Fast pyrolysis followed by reforming of carbohydrate fraction of bio-oil.
• Thermochemical gasification coupled with the water-gas shift.
•  Direct solar gasification.
• Supercritical conversion of biomass.
• Biomass-derived syngas conversion.
The challenges faced by using the aforementioned chemical and electrolytic process are the need for high energy, high pressure and high-temperature conditions, pollution-causing and hence not commercially as well as environmentally sustainable.
The alternative method for economic production of hydrogen for renewable energy generation and utilization is through Biohydrogen. Biohydrogen can be produced by the microbial conversation of biomass. There are various methods for the production of Biohydrogen. These are as follows:
• Direct biophotolysis
• Indirect biophotolysis
• Hybrid Reactor system
• Photo fermentation
• Dark fermentation
The processes which require sunlight such as photo fermentation and direct biophotolysis, there is an additional sunlight energy requirement which can only be provided in the day time. In addition to this, as the biomass of different microorganisms such as cyanobacteria grows during fermentation, they produce some pigment which gives the shielding effect to the sunlight. This leads to the lower sunlight to Biohydrogen conversion rate with time.
When we talk about the indirect biophotolysis in which algae is used for Biohydrogen production from water, water is simply converted to hydrogen and Oxygen. This gives hope for future production of biohydrogen from water, but the challenge is to overcome the oxygen inhibition effect (hydrogenase enzyme activity decreases with increased O2 concentration) on hydrogenase enzyme which is responsible for the production of hydrogen. If we find a way to overcome this problem then there will be an abundant supply of energy simply from water. After understanding the various methods and challenges involved in different bioprocesses for Biohydrogen production. We come to the conclusion that the Dark fermentation method of Biohydrogen production is the most economic method from all. Dark fermentation does not require any sunlight, and Biohydrogen can simply be produced by bioremediation techniques as a by-product in adequate amount. It can use sludge from secondary wastewater treatment plant, agricultural waste as well as other organic waste as raw material, requires optimum temperature, pressure and pH condition to yield Biohydrogen. Hence, we can say that it is much better processed as compared to even chemical and electrolytic techniques for green hydrogen production because of it's much lower energy needs as well as provide a solution for waste disposal. The Biohydrogen produced in this way can be used as a source to produce electrical energy through devices such as Fuel cell, Microbial Fuel Cell, Methanol Fuel Cell, etc.
General flow chart of electricity production via bioprocess (through biohydrogen) 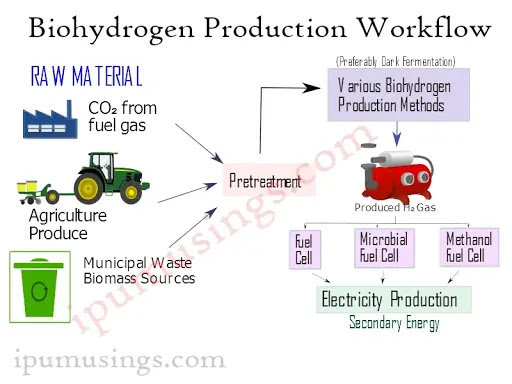