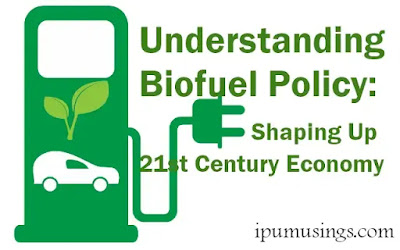 What do you understand by biofuel economy?

First-generation biofuels are made from sugar crops like corn, sugarcane, oilseeds, etc.

Sugars and starch are converted to bio alcohols through fermentation. Oils and animal fats are processed to make biodiesel, their potential blend B25 is running in the market for general consumption.

1. There are numerous benefits by shifting fossil fuels by biofuels.

2. While the production of biofuels results in GHG emissions at several stages of the process, EPA's (2010) analysis of the Renewable Fuel Standard (RFS) projected that several types of biofuels could yield lower lifecycle GHG emissions than gasoline over a 30-year time horizon.

The potential impact on the environment by biofuel use:

Environmental impacts are ambiguous, but there could be net increases in CO₂  as well as negative impacts on land use. Biofuels policies thus need to be designed based on balancing costs and opportunities in specific countries, taking into account as well the impacts on global CO₂ emissions.

The new biofuel policies come to underplay to cope up with oil price shocks and many other developing and developed nations have made policies related to biofuel uses and its expenditure.

The raw material for biofuel is mainly crops and animal fats which may increase the burden on land because corn will be the major substance in making biofuel.

The policy will boost the Gross domestic product (GDP) of the countries which are already providing more and more raw material such as Brazil, USA, etc. but the ambitious countries like India may face some issues due to limited landmass for production. At the globally aggregated level, the expansion of biofuels causes only a minor reduction in GDP – 0.02% in 2020.

This reform will directly or indirectly affect the price of a food staple in many countries, The price of major grains may rise to 3% and sugar to 8%, which will affect the underprivileged and developing nations the most.

A significant reallocation of land would be induced as land devoted to feedstock crops (such as sugar crops, corn, wheat, oilseeds) increases at the expense of lands used for non-feedstock production.

The increased use of domestic biofuels will have only a limited effect on the domestic price of liquid fuels, as oil prices are set in a global market and the price of biofuels would be bid up to the extent that demand can move relatively quickly from petroleum fuels to biofuels.

So-called second-generation biofuels are derived from biomass that is not used for food (such as agriculture residues, or non-crop plants such as switchgrass). These feedstocks are expected to put less pressure on the global food supply because their feedstocks do not directly compete with food supply. Moreover, they likely will require lower amounts of land due to higher biofuel yield as compared to the first-generation feedstocks, and they can be grown on lower quality lands. However, currently available information about the economics of second-generation biofuels indicates that large-scale commercial production would not be economically viable until significant technological advances occur. These advances are likely to require several years of further innovation. Thus, second-generation biofuels are unlikely to play a significant role in the overall supply of fuels in the near and medium-term, unless potentially costly support policies specific to these technologies are implemented. 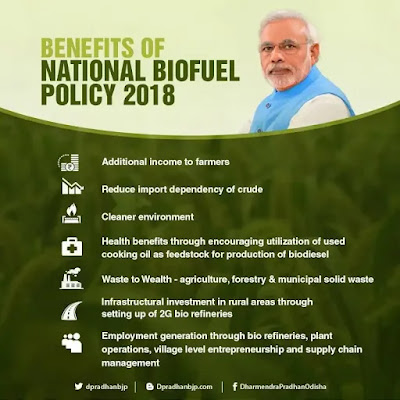 Introduced in the year 2009, the current edition of the NATIONAL POLICY on BIOFUELS was approved by a union of ministers in 2018.

The policy is aiming forward to blending 20% of biofuels in the mainstream of fossil fuels by 2030. At present India relies most of its nonrenewable energy on crude oil and according to Ministry of new & renewable source of energy states that It affects mostly the developing countries.

The Indian government has set some ambitious goals to accomplish, which are

2. Reduction in energy emission by 30~35% by 2030 &producing above 40% of electricity by nonrenewable sources.

3. The official gazette of the National Policy on Biofuels, 2018, MNRE has also discussed the government's five-point strategy to curb the country's dependency on imports in the oil and gas sector. The strategy involves increasing domestic production, adopting biofuels and renewables, energy efficiency norms, improvement in refinery processes, and demand substitution.

4. MNRE has set an indicative target of 20% blending it with ethanol in petrol and 5% blending of biodiesel to be achieved by 2030, this percentage today stands for 2% petrol and 1% in diesel.

5. The Ministry has also outlined a roadmap for the efficient realization of the policy which entails the following steps:

● Facilitate the blending of biofuels with conventional fuels

7. As a part of the policy, the government will also undertake the following steps to foster the adoption of biofuels.

● Through the Ethanol Blended Petrol (EBP) Programme, ethanol produced from various types of feedstocks would be blended with petrol.

● Second-generation (2G) ethanol technologies would be developed and commercialized.

● Through the Biodiesel Blending Programme, biodiesel would be blended with diesel.

8. The Ministry also plans on creating a 'National Biomass Repository' through a nation-wide appraisal program which will help ensure the availability of biofuels produced from the domestic feedstock.

9. Through the National Policy on Biofuels, 2018, the government will undertake various financial as well as fiscal measures from time to time to ensure effective development, promotion, and adoption of biofuels in the country. Research and development in the sector will also be supported through this policy.

Ankit Kumar, studying at University School of Chemical Technology, GGSIP University, Delhi, India. He wants to pursue his career in biofuels technology.
👉See Also:
Biohydrogen - An alternative Renewable Energy Resource - An Overview
An article giving an overview of biohydrogen which can be used as a renewable fuel in future.