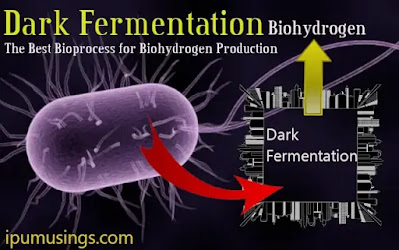 Hydrogen is one of the promising renewable, clean fuel for the future. The reason behind this claim is due to it's higher energy content(two times more) per kg as compared to gasoline, zero carbon emissions. There are many Thermochemical processes by which hydrogen can be produced but all of these are highly energy intensive and uses Fossil fuel as the primary source for its production, hence are not the solutions. Instead, the biological processes especially the Dark Fermentation method can become the game changer as it can use organic waste from various sources and convert it into Biohydrogen along with providing various industrially important by-products such as ethanol, acetic acid, butyric acid, etc.

In dark fermentation method, strict or facultative anaerobic bacteria most commonly Enterobacter, Bacillus and Clostridium oxidise the substrate (commonly glucose) into pyruvate using glycolytic pathway. This pyruvate produces hydrogen gas by reduction of H+ ions by ferredoxin in order to gain the electrical neutrality. Some volatile fatty acids or alcohols are also produced along with it. Among all the pathways of hydrogen gas production, the acetic acid pathway can produce the highest moles of Hydrogen per mole of glucose which are 4 moles theoretically (if no biomass production which is not possible). In fast acetic acid pathway is most energetically favorable pathway preferred by Hydrogen producing microbes. Pure cultures as well as mix microflora can be used for biohydrogen production.  Using pure cultures can be little expensive but can increase the biohydrogen yield. The strict anaerobes which are reported to give the good yield are C.acetobutylicum, C.beijerinekii, B.butyrilicum among others. The biochemical reactions involved in the process are as follows:

Acetic acid and butyric acid producing reactions can be given as:

Choice of a substrate for dark fermentation has a huge impact on the biohydrogen yield. Especially substrate which is rich in carbohydrate is preferred. Although there are many 1st generation substrates such as glucose, corn, sugar cane, sugar beets, etc. which have higher yields. But these are not economically viable at industrial scale for biohydrogen production process. The second generation wastes which mainly consist of Agricultural residues from plant biomass waste (such as lignocellulosic waste, livestock waste), industrial waste (such as from palm oil mill waste water, dairy industry, brewery industry) , municipal waste (such as organic fraction of municipal solid waste) , waste water having higher organic content can also be used. Along with these some trace micro and macro nutrients which are essential for the growth of microorganisms can be introduced, again by using wastes of some other chemical industries. All of these substrate choices are very promising for the production of renewable hydrogen for industrial scale. Along with benefits there are some drawbacks such as sterilization of the organic waste used, therefore mix microflora is used to avoid sterilization. Most of the time the microflora used in the process consumes the hydrogen produced and convert it into methane (especially methanogens) which ultimately reduces the overall yield.

Although Dark Fermentation method as the highest of all the bioprocesses used in biohydrogenproduction but still there is a lot of scope for improvement since their is still a considerable gap between theoretical and actual amount of biohydrogen produced.

The biohydrogen yield can be increased further by using "sequential two-stage dark and photo fermentation processes.". In this process, the organic substrate is anaerobically digested by the light independent bacteria into simpler compounds such as fatty acids (acetic acid or butyric acid). Further these metabolites of the dark fermentation are used by photo-synthetic bacteria to produce biohydrogen. The basic idea of the process is to achieve complete conversion of substrate and higher biohydrogen production. It is evident that by using this method we can increase the yield of biohydrogen from 4 moles to 12 moles theoretically.

Pavitra Khurana, studying at University School of Chemical Technology, GGSIP University, Delhi, India.
👉See Also:
📌 Biohydrogen - An alternative Renewable Energy Resource - An Overview
An article giving an overview of biohydrogen which can be used as a renewable fuel in future.
📌 Bioprocesses in Hydrogen - Description, Effectiveness and Challenges
Posted by www.eduvictors.in at 21:25