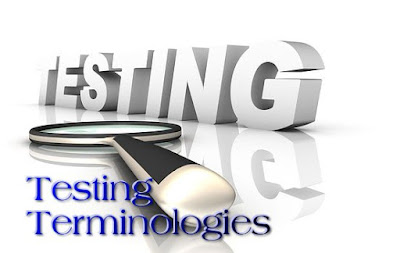 Test Harness: It is a small program written specifically to test a particular subroutine or module. It feeds data to the module under test and displays result. It usually has a GUI so that user can create data and put it under module being tested.

Test Basis: All documents from which the requirements of the system can be inferred and test cases are based.

Test Script: It is a program used to automate test procedure specification.

Test Oracle: A source to determine expected result to compare with actual results obtained from software under test. Oracle can be requirements specification, manual or an individual's specialized knowledge but cannot be the code.

Test Data: Data that is used while testing a system/component/module.

Test Suite: Collection of test cases for a system where the post condition of one test is used as precondition for the next one.

Test Coverage: The extent to which the source code or modules of a program is/are involved during testing. It is measured in terms of the percentage of components or functions called during the test.

Test Driver: It is a set of modules that act as temporary replacement (called stubs) for a calling module and give the same output as that of the actual product.

Test Strategy: A static document prepared by the higher management of the testing team. The artifact defines the test objectives of all test stages and the techniques that apply.

Test Plan: A document that describes the scope, approach resources and schedule of intended test activities.