10 roles of a manager as suggested by Henry Mintzberg

10 roles of a manager as suggested
by Henry Mintzberg 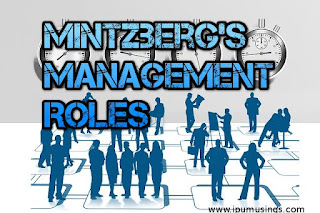 Question (BCA 2014): Discuss the 10 roles of a manager as suggested by Henry Mintzberg

Answer: A manager's role is complex as well as multi-dimentional. Every day he/she has to fulfill many different roles.  A variety of forms depending on the needs of the organization and the people that are being led.

Prof. Henry Mintzberg published his Ten Management Roles in his book, "Mintzberg on Management: Inside our Strange World of Organizations" in 1990.

The 10 roles are then divided up into three categories:


ⅰ Figurehead
In this role, a manager performs social, ceremonial and legal responsibilities as required by the status of his office. Making speeches, bestowing honours, welcoming official visitors, distributing gifts to retiring employees are examples of social and ceremonial duties.

ⅱ Leader
Sets relationship between manager with his own subordinates. The manager legitimizes power and duties of subordinates, brings their needs in accord with of his organization and leads by an example.

ⅴ Disseminator
It involves transmitting information and judgments to the stakeholders of the management. e.g. sending quarterly project progress reports to senior management.

ⅶ Entrepreneur
It involves creating and controlling change within the organization. e.g. initiatiing a feasible study to set up a plant.

Email ThisBlogThis!Share to TwitterShare to FacebookShare to Pinterest
Labels: BCA-Sem2, Business Organization and Management, Principles and Practices Of Management