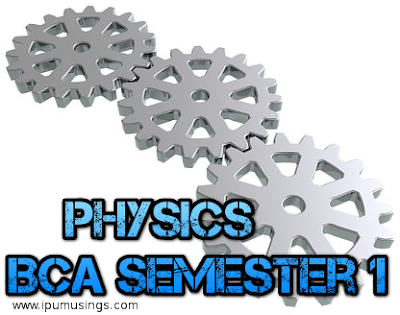 Q1: If a body is not at rest, then the net force acting on it cannot be zero. Is this statement true or false? Justify your answer.

Answer: False. A body moving with constant velocity will have a zero acceleration. Therefore it must have a zero net force.

Therefore the work done against the force of gravity is -200 J.


Q3: Define the SI unit of power. Give its relationship with one horse power. 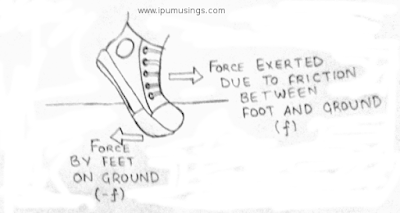 Answer: When we walk, we push the floor backward. If the friction was absent our foot will go backwards. It is due to friction (reaction and self adjusting force), that the floor pushes our foot (and by extension us) forward.


Q5: Define Newton's first two laws. Show that the first law can be obtained from the second law.

Answer:
Newton’s First Law: Every object resists the change in motion. It will continue its motion unless an external force is applied.


Now let us assume F = 0 N.
Since mass of an object can’t be zero, the acceleration must be zero.

According to Newton’s second law of motion, F = ma


Q7: Define momentum. Write its SI units. Is it a vector or scalar quantity.

Answer: Momentum of an object is defined as the product of the mass of that object times the velocity with which it is moving.

SI units of momentum is kg m/s. Momentum is a vector quantity.

Answer: Static friction is the amount of friction that is applied on the body when it is not moving. It is the force that is to be overcame to move an object.

Its value varies from zero to Coefficient Of Friction(μ) ✕ Normal Reaction(N).

Kinetic friction on the other hand is applied when the object is moving. It always have a fixed value of Coefficient Of Friction(μ) ✕ Normal Reaction(N).


Q9: Static friction is a self adjusting force. Explain.

It can have a maximum value of Coefficient Of Friction(μ) ✕ Normal Reaction(N).

Any force greater that it can displace the block as static friction will be smaller than it.
Therefore, static force is a self adjusting force.


Q10: A horizontal force of 490 N is required to side a sledge weighing 600 kgf over a flat surface. Calculate the coefficient of friction.

Answer: Since 490 N force is required to move the sledge, the static friction must be 490 N.


Q11: Define work and its SI unit. What is the meaning of negative work? Briefly explain.

Answer: Work is defined as the dot product of Displacement and the net external force on the object. i.e. Work = Displacement . Force.

Its SI unit is Joule(J).


Q12: Write the expression for the potential energy of a compressed spring. Explain the various terms.


Q13: Write the names of different forms of energy. Explain the law of conservation of energy.

Conservation of energy states that energy can neither be created nor destroyed. It can only be transformed from one state to another. For example, a rock thrown upwards by a man converts the chemical energy stored in muscles to kinetic energy of the stone, which later gets converted to potential energy and then back to kinetic energy.

Answer: Elastic Collision: Perfectly Elastic Collisions are the one in which both momentum and kinetic energy is conserved. Energy is not wasted in sound and deformation of the colliding objects. 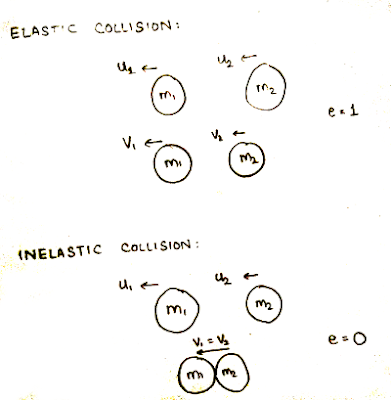 Inelastic Collision: Perfectly Inelastic Collisions are the one in which only momentum is conserved. Kinetic energy is not conserved, the initial kinetic energy is converted to sound and energy needed to deform the object on impact.
Let us consider two balls moving with speed u₁ and u₂(>u₁).
They collide and have final speeds v₁ and v₂(=v₁).
Let the masses of the balls be m₁ and m₂.


Q15: Two identical bodies each of mass M moving with speeds U1 and U2 along a straight line undergo a head on perfect inelastic collision. Calculate the loss in kinetic energy.

Answer: In a perfect inelastic collision, the final velocities of both the objects will be same, let us say V.
By conservation of linear momentum, 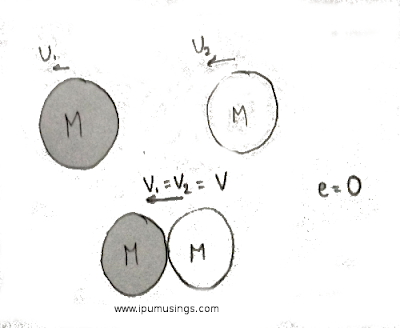