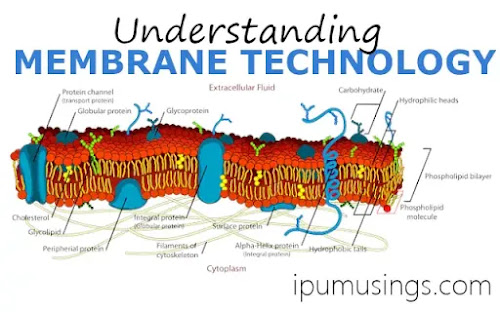 Membrane technology is a scientific term for a number of different, very characteristic separation processes. The membrane separation process is mainly based on the presence of semi-permeable membranes. The principle is “the membrane acts as a very specific filter that will let water flow through, while it catches suspended solids and other substances”. There are various methods to enable substances to penetrate a membrane. These can be performed by the following: applications of high pressure, the maintenance of a concentration gradient on both sides of the membrane and the introduction of an electric potential. 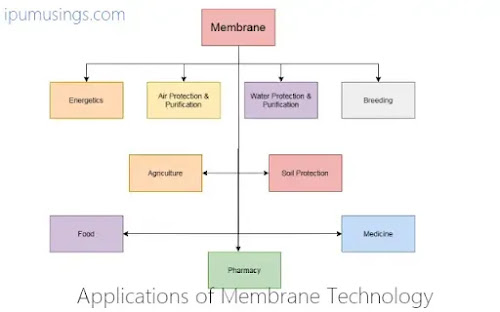 Membranes are said to be hydrophobic because as most of the membrane resides in the aqueous environment and the components are also mostly in an aqueous state so it has to separate one of the components from the other. Phospholipids are the molecules consisting of a phosphorylated polar head group attached to a glycerol backbone that has two long hydrocarbon tails and is given the name amphipathic. The phospholipids are considered as primary components of the membrane but there are other significant parts like other lipids, including cholesterol, integral and peripheral membrane proteins, and glycosylated lipids and proteins.

Micelles can form with other amphipathic lipids, the most recognizable being detergents such as sodium dodecyl sulfate also called sodium lauryl sulfate (SDS), it is most commonly used in common household products such as shampoos. A large single layer of phospholipid is unlikely to serve stably as a biological membrane. Micelles form easily with SDS and other single-tailed lipids because their overall shape (van der Waals envelope) is conical, which lends itself to fitting tight curvatures. 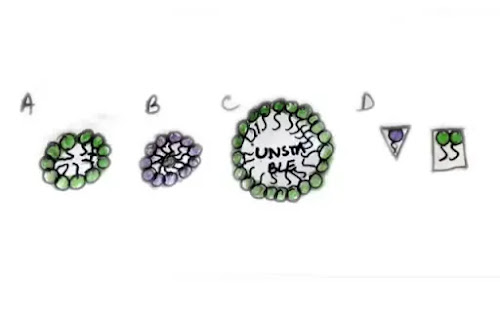 The cell membrane is composed of three main types of components:

• Carbohydrate portions of glycolipids and glycoproteins (10%)

• Water is present in the membrane

• Ions are associated with it.

1. The lipid component of the cell membrane

There are said to be hundreds of different types of lipid molecules in every cell but there are a few which are of key importance, their mass accounting for the majority of total membrane lipid:

a) The outer half of the bilayer:

b) The inner half of the bilayer:

Cholesterol is a major membrane component and is present in a fairly variable amount, depending on the cell and species. Out of the different lipids in the cell membrane, some of them play a role which has special physiological significance, whereas others appear to be essentially filler and ballast. Phosphatidylinositol is involved in second messenger system, and phosphatidylserine is a signal molecule which is everted onto the external side of the membrane when a cell is undergoing apoptosis, signalling to macrophages that it needs to be demolished.

2. The protein component of the cell membrane

The cell membrane consists of 50% of the protein in it. They can easily be classified as:

• Transmembrane proteins which span over both sides of the membrane

Peripheral proteins would dissolve and drift away, they would say, and integral transmembrane proteins would remain stuck in the membrane until you use a non-polar solvent or detergent to disrupt the lipid bilayer.

3.Polysaccharide component of the cell membrane

The carbohydrate components in the cell membrane, which are integrated into the lipid or protein components of the membrane, like glycolipids or glycoproteins. Depending on the cell type, this carbohydrate coat may have minor structural importance, or it may have profound organism-level significance like the endothelial glycocalyx depicted below in an electron microphotograph which is difficult to attribute.

4.Water in the cell membrane

The cell membrane has a surprising amount of water in it, for something that is supposed to be a mainly lipid-based cellular object. The active membrane consists of:

• Organized water, complexed with the hydrophilic heads of the phospholipid molecules

It is probably important to remember that there is plenty of water in the membrane and that it does useful things. The lipid bilayer molecules do not fit neatly together but rather are piled somewhat haphazardly, with gaps between them formed by the "kinks" in their hydrophobic tails.

5. Ions associated with the cell membrane

The cell membrane is a charged object suspended in a soup of dissolved ions, and therefore it is unsurprising that it might interact somehow with the ionic constituents of extracellular and intracellular fluid.

At physiologic pH, membrane components generate mainly negative changes. Phospholipid head groups dissociate to generate H2PO₄⁻, HPO₄⁻² and PO₄⁻³   Sialic acid associated with integral proteins generate COO⁻ groups. This phenomenon in a living membrane is highly complex and variable: the surfaces of the membrane are heterogeneous, and there are islands of variable charge which migrate around the lipid bilayer. On top of that, the presence of membrane proteins and polysaccharides make it difficult to behold the cell membrane as some sort of uniform capacitor with ions neatly arrayed along either side. 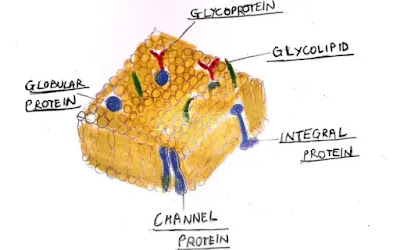