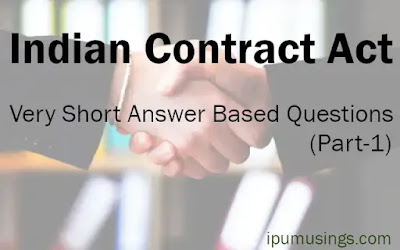 Q1: When did Indian Contract Act come into effect?
Answer: The Indian Contract came into effect in the month of September in 1872.
Q2: What is the basic purpose of Indian Contract Act?
Answer: The act mainly deals with the provisions for everyday contracts and the promises that bind two or more parties. It has specific provisions to deal with special transactions like bailment, pledge, guarantee, indemnity etc.
Q3: ‘Law of contract creates jus in personam and not in jus in rem.’ What do you mean by 'jus in personam'?
Answer: The law of contract is different from other branches of law. 'Jus in Personem' means the rights available against a particular person, where for only the parties thereto are bound.
e.g. Right to Property/ Right to receive compensation for false imprisonment or defamation/ Rights under a contract are rights in personam
Q4: ‘Law of contract creates jus in personam and not in jus in rem. ’ What is meant by 'jus in rem'?
Answer: 'Jus in Rem' means the rights available against the world at large.
e.g. Right to Security/ Right to Freedom/ Right to Privacy etc
Q5: Mr X owes an amount of ₹ 20,000 to Mr Y. Here Mr. Y has the right to recover this amount from Mr. X and only from Mr. X and not from anybody else.
Is this the right of 'jus in rem' or 'jus in personam'?
Answer: This right is known as jus in personam.
Q6: Does the Indian Contract Act have retrospective effect?
Answer: No the Indian Contract Act, 1872 does not have any retrospective effect. It was effective from September 1872, and any contracts prior to that are not governed under the act.
Q7: Define the term 'offer'.
Answer: When one person signifies to another his willingness to do or to abstain from doing anything, with a view to obtaining the assent of that other person either to such act or abstinence, he is said to make a proposal or an offer.
Q8: Define the term 'Acceptance'.
Answer: When the person to whom the proposal or offer is made, signifies his assent there to , the proposal is said to be accepted.
Q9: What is 'quid pro quo' in Contract act?
Answer: Quid pro quo is Latin term for "something for something". It describes a situation when two parties engage in a mutual agreement to exchange goods or services reciprocally. e.g. Price paid by the one party for the promise of the other i.e. 'something in return'.
Q10: What is 'consideration' in contract act?
Answer: When at the desire of the promisor, the promisee or any other person has done or abstained from doing something or does or abstains from doing something or promises to do or abstain from doing something, such act or abstinence or promise is called a  consideration for the promise.
Q11: What is meant by the term 'agreement' in contract act?
Answer: Every promise and set of promises forming the consideration for each other.
In short, agreement = offer + acceptance.
Q12: Under what conditions, all agreements are said to be contracts?
Answer: All agreements are contracts, if they are made –
☞ by free consent of the parties, competent to contract,
☞ for a lawful consideration
☞ with a lawful object, and
☞ not hereby expressly declared to be void.
Q13: Is an agreement of a purely domestic or social nature a contract or not?
Answer: No. An agreement of a purely domestic or social nature is not a contract.
Q14: A and B agree to go to a movie on coming Sunday. A does not turn in resulting in loss of B’s time. Can B claim any damages from A legally?
Answer: B cannot claim any damages from B since the agreement to watch a movie is a domestic agreement which does not result in a contract.
In case of social agreement there is no intention to create legal relationship and there the is no contract.
Q15: Can verbal commercial agreement be considered as legal contract?
Answer: Yes. In case of commercial agreements, the law presume that the parties had the intention to create legal relations.
Q16: Are all contracts agreements?
Answer: Yes
Q17: Are all agreements contracts?
Answer: No
Q19: What do you mean by 'Consensus ad idem'?
Answer: It means 'meeting of the minds' i.e. two or more persons are said to give consent, when they agree on the same thing in the same sense.
Consensus ad idem in contract law means there has been a meeting of the minds of all parties involved and everyone involved has accepted the offered contractual obligations of each party.
Q20: What are the four essentials a valid contract?
Answer: The essentials of a valid contract are:
① Consent of the parties i.e., Consensus ad idem
② Legal capacity or competence of the parties
③ Consideration and
④ Lawful object and lawful consideration
👉See Also & References:
Balfour vs Balfour
Law of Contract-I End Term Paper (Dec 2019)