The use of fossil energy resources by traditional and conventional methods leads to the emission of harmful greenhouse gases that get trapped in the atmosphere and leads to global warming which has become a major concern for the world. Also, global energy requirement and Global energy crisis have led to significant research and usage of sustainable and renewable energy resources to fulfil the barrier, because most of the Energy gets unutilized and wasted, so there is a need of recovery of this energy into useful energy. Modern advancement in the branch of semiconductors has made it possible to extract and use this waste heat energy by directly converting it to electricity. This review is about various applications of such devices that are being used and are integrated with other non-conventional sources and thus improving the overall efficiency of the system. This paper discusses different Thermo-Electric Generators integrated with substantial Energy Resources namely

(ii) Biogas-fueled Thermo Generators and their applications that generate electricity in a grid form that makes it possible to conveniently store and use Electricity.

Also, the advancement in nanotechnology has given this topic a push and to use it as a replacement for fossil fuels. The study and characterization of nanomaterials to build this small, compact, environment-friendly, renewable, maintenance-free, affordable Heat Engine have led to numerous applications that in today's world are capable of acting as an alternative for conventional sources of electricity generation.

As of 2011, about 85% of the global energy supply was from fossil fuels [1]. The continuous use, extraction through mining, fluctuations in fossil prices, depletion of reserves, and environment challenges have led to the use of Non-conventional and Renewable  Resources to be used as an alternative.

The advancement in nanotechnology and techniques related to the study of particles has led to the development in various fields of semiconducting devices that are capable of meeting the quest of the global energy and the use of sustainable resources. Solid Semi-conducting Electric generators not only are renewable but also act as a bridge to extract and quantify the waste heat energy from the Heat Engines of industries. These heat-engines have several advantages of conventionally used dynamic Electricity Generators (e.g.Rankine, Brayton, or Stirling engine) are expensive and do not scale easily for small applications i.e. generating power of tens of Watts.

Internal combustion engines are cost-effective and efficient in the nearly 100 W to 100 kW range, when high-quality combustible fuel is available [7], but tend to be noisier, are non-reliable, require maintenance, consider space and cannot be fit everywhere. For applications requiring less than 100W, the scalability of thermo-electrics gives them a clear advantage. A thermo-electric is made up of Thermo-electric modules(TE) that are made of tens and hundreds of Thermo-electric couples. 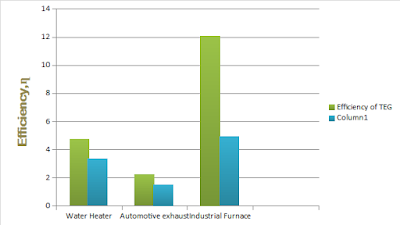 A thermoelectric generator (TEG) consists of numerous Thermoelectric (TE) Module consists of several units of n- and p-type semiconductors connected electrically in series and thermally in parallel. Material performance is determined by the figure of merit ZT. It depends on the thermoelectric material properties Seebeck coefficient  S, electrical conductivity , and thermal conductivity, and ZT = S2 σT / k where T is the temperature of the material. Therefore, to increase the figure of merit for Thermo-Electric Generators various techniques of nanostructured materials and modulation of Energy Generation Systems have led to a significant increase in the efficiency of these devices which are having several applications. These devices have to be integrated with other energy resources because for a particular application the figure of merit will become highest and for others, it can tend to give fewer peak values, so overall average peak value must be high to increase its output power and efficiency. [8]

A thermoelectric generator works on the principle of SEEBECK EFFECT i.e. the voltage produced by a thermocouple is directly proportional to the temperature gradient provided between its two terminals. However, the hot side of a TEG is not at the same temperature as of the Source hence, some of the heat is not transferred by the medium and some are lost because of resistance provided by the solder material used for connecting Thermo-modules with other connections within the TEG. Therefore, to minimize the contact as well as the loss of heat from the source to TEG, a thermal material is used with certain thermal conductivity.

Photovoltaic cells and Large-scale Solar Power Generators are used for different applications mainly for water generation but due to certain drawbacks, recent researches have shown that a Solar TEG can be used as a device to harness solar energy by absorbing sun radiations and converting that energy to desired output by a generator system. To maximize the output power, the sun radiations must be fully absorbed and energy should not escape the system. This can be done by integrating TEG with Spectrally Selective Absorber which concentrates radiations, and the latter can be improved by the use of vacuum enclosure which reduces the pressure of the system and leads to a decrease in convective heat transfer coefficient, thus increasing ZT(Figure of merit).[1]

So far the state-of-the-art solar TEG systems have achieved an efficiency of five percent for a temperature difference of about 100 C with the materials of Figure of merit(ZT) ~ 1 [2].

The most used application of Solar TEG is Thermal Electric sensors that convert solar energy into electric signals e.g cryogenic heat-flux sensors, water condensation detectors, fluid-flow sensors, and infrared sensors.[3] Such types of generators majorly have three parameters as the time constant, responsivity (ratio of the output voltage by input power), and noise voltage. Based on thermo-electric films this system is the most suitable and effective in terms of size and light-weight.

Gases like CO₂, methane, oxides of sulfur, hydrogen causes the Greenhouse effect as most of these gases are released during combustion. But when these gases are produced from renewable sources like hydrogen produced from Biogas, it can become a better alternative and has the potential to produce energy sustainably. Hydrogen has inherent high energy content and can be directly used in Internal Combustible Engines. Due to its capability of producing higher energy when such an engine be integrated with a TEG, much amount of Heat energy can be saved and utilized. Hydrogen gas can be produced from both conventional and renewable technologies. Hydrogen gas can be produced conventionally when fossil fuels such as petroleum, coal, and natural gas are subjected to processes such as hydrocarbon reforming, pyrolysis, and gasification. On the other hand, biomass and water are the two renewable sources from which hydrogen can be produced.[3] Hydrogen can also be used in cooling operations and research was carried to examine the results. This system can be used in automobiles as a coolant which will reduce the engine load and can serve as a better alternative.[6] Also, it's environment-friendly and requires less energy as input.

(For Tables and Figures)