AN INTRODUCTION TO CARDIAC TISSUE ENGINEERING 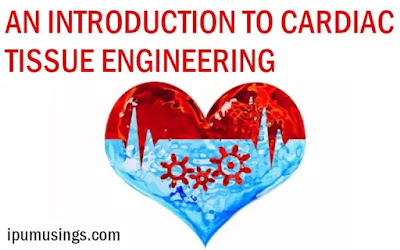 Heart failure is the favored reason behind death in industrial countries. myocardial infarct usually results in fibrotic scar formation and for good impaired internal organ function as a result of, when a huge cell loss thanks to ischemia, the heart muscle tissue lacks the intrinsic regenerative capability. In end-stage heart failure, heart transplantation is the last treatment option with good long-term benefits. Owing to the lack of organ donors and conditions associated with immune suppressive treatments, however, scientists and surgeons are continuously trying to find new strategies to regenerate the injured heart tissue. In general, scaffold materials such as gelatin, collagen, alginate, or synthetic polymers and cardiac cells are used. The problem is that adult heart muscle cells, cardiac myocytes, cannot divide to replace abraded cells. Thus, despite a restricted population of resident cardiac stem cells, the heart cannot repair itself by any native processes. Instead, scar tissue develops over the damaged part of myocardium. Such scar tissue keeps the organ intact but it cannot contract. The perfect clinical intervention would either avoid such scar formation or just replace the scar tissue with functioning cardiac muscle tissue. In the first approach to such therapy, investigators used injections of new cells into damaged areas of cardiac tissue.

Efforts to regenerate functional myocardial tissue are firstly, being pursued by grafting cells with help of a syringe injection directly in the ventricular wall or in the coronary vessels. implantation in the heart were first achieved nearly ten years ago, using genetically chosen embryonic stem cell derived cardiomyocytes.

Materials as scaffolds for cell transplantation

One of the first materials used for tissue engineering of the heart was based on some polymers composed of polylactic acid, polyglycolic acid (PGA), and their copolymer polylactic-coglycolic acid (PLGA). Subsequently, researchers realized that the mechanical properties of the material used should be adapted to the elastic properties of the cardiac tissue. Therefore, most research focused on the use of hydrogels made of different synthetic or natural polymers. Several groups are currently working with scaffold materials made up of natural polymers like as collagen. Collagen is the most abundant constituent of the extracellular matrix (ECM).

Exploiting some basic nature’s principles directly is the driving force behind widely used attempts to make an artificial heart by decellularizing whole hearts and then repopulating them with cardiac cells.

Heart tissue continuously beats under the control of pacemaker Cells present in the sinoatrial node (SAN). Engineered cardiac constructs also beat spontaneously but the rate varies with some irregularity over time. Some Experiments with a composite method of seeding collagen sponges with cardiac cells in Matrigel have shown that pacing for 8 days improves cell orientation, tissue structure, and its function. Heart tissue is composed of myocytes and nonmyocytes, such as fibroblasts, endothelial, and smooth muscle cells. Similarly, collagen contains nonmyocytes plus macrophages at a really high density, intricately mixed with cardiac myocytes. Numerous lines of evidence suggest that nonmyocytes support the growth of myocytes in culture and are important in the generation of engineered constructs.

Grafts need to be electrically coupled to the host heart’s proper functioning. Because coupling is not expected to take place in the infarcted zone of a recipient’s heart, most researchers take care to implant tissues/cell sheets in a way that the edges remain in contact with healthy myocardium.

Heart transplantation is limited due to the deficient supply of donor organs. Recent data on the implantation of differentiated cardiac and non-cardiac cells as well as on adult stem cells of different origins have provided hope for the replacement of cells after the heavy irreversible loss of viable cardiac cells due to myocardial infarction. As compared with the direct injecting syringe of a cell suspension into the heart, cardiac tissue engineering strategies are now emerging as a beneficial alternative to augment both cardiomyocyte number and contractile function of the failing heart. A critical step is the creation of suitable 3-D matrices composed of natural or synthetic scaffold materials that can host the cells, to allow the maintenance of cellular viability and differentiation and helps in cell integration. Clearly, the survival of these patches under the ischemic conditions present in the injured heart is a big challenge that needs to be addressed. Poor electrochemical and vascular integration of cell constructs are some common reasons for low functional gains.

Mridula Vats, a graduate student of University School of Chemical Technology, GGSIP University, Delhi. She is pursuing her degree in biochemical engineering and is interested in biotechnology.

This Is How Tissue Engineering - A Brief Overview On Stem Cell Technology - Will Look Like In 10 Years Time.

An Introduction to Liver Tissue Engineering