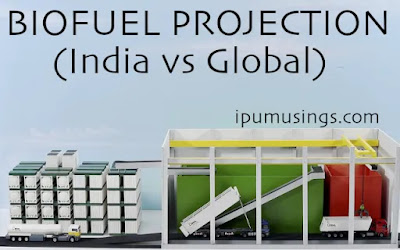 What do you mean by biofuel projection?

Biofuel projection is an estimate or forecast of a future situation based on a study of present trends.

It have a great chance in India to rise and thrive as well as globally.

Various scenarios have resulted in high estimates of biofuel in the future energy system. The availability of the resources is an important factor if high shares of biofuel penetrate the electricity, heat or liquid fuel market.

India’s fuel consumption growth is among the fastest growing in the world coupled with an almost stagnant domestic crude oil production. This has forced the country to import more than 82 per cent of its crude oil requirement in the last couple of years, leaving the country’s economy bare to shocks caused in the global crude oil supply market and rupee-dollar exchange rate.

Road transport sector accounts for 6.7 per cent of India’s Gross Domestic Product (GDP). Currently, diesel alone meets an estimated 72 per cent of transportation fuel demand followed by petrol at 23 per cent and balance by other fuels such as CNG and LPG for which the demand has been steadily rising.

Lack of domestically produced crude oil, coupled with an increasing appetite for fuels in the country, has pushed the government to explore other fuel alternatives for mobility applications. The Centre announced a comprehensive ‘National Policy on Bio-fuels’ in June 2018.

In India there is a large infrastructure dependent on fossil fuel but biofuel may come up as a good alternative which can help India from economic shocks.

Biofuel seems to be the best alternative till today and it has a promising position in India.

The rationale is to facilitate the transition from the hydrocarbon economy to the carbohydrate economy by using biomass to produce bioethanol and biomethanol as replacements for traditional oil-based fuels and feedstocks. The biofuel scenario produced equivalent rates of growth in GDP and per capita affluence, reduced fossil energy intensities of GDP, reduced oil imports and gave an energy ratio. Each scenario has advantages whether it is rates of growth in GDP, reductions in carbon dioxide emissions, the energy ratio of the production process, the direct generation of jobs, or the area of plantation biomass required to make the production system feasible.Renewable resources are more evenly distributed than fossil and nuclear resources, and energy flows from renewable resources are more than three orders of magnitude higher than current global energy use.

Today’s energy system is unsustainable because of equity issues as well as environmental, economic, and geopolitical concerns that have implications far into the future .According to International Energy Agency (IEA), scenarios developed for the USA and the EU indicate that near-term targets of up to 6% displacement of petroleum fuels with biofuels appear feasible using conventional biofuels, given available cropland. A 5% displacement of gasoline in the EU requires about 5% of available cropland to produce ethanol while in the USA 8% is required. A 5% displacement of diesel requires 13% of USA cropland, 15% in the EU. The recent commitment by the USA government to increase bio-energy three-fold in 10 years has added impetus to the search for viable biofuels [98]. The dwindling fossil fuel sources and the increasing dependency of the USA on imported crude oil have led to a major interest in expanding the use of bio-energy.

The recent commitment by the USA government to increase bio-energy three-fold in 10 years has added impetus to the search for viable biofuels. The EU have also adopted a proposal for a directive on the promotion of the use of biofuels with measures ensuring that biofuels account for at least 2% of the market for gasoline and diesel sold as transport fuel by the end of 2005, increasing in stages to a minimum of 5.75% by the end of 2010 .

What are the other source of energy which also counts?

Hydrogen is currently more expensive than conventional energy sources. There are different technologies presently being practiced to produce hydrogen economically from biomass. Bio hydrogen technology will play a major role in future because it can utilise the renewable sources of energy [74]. Hydrogen for fleet vehicles would probably dominate in the transportation sector. To produce hydrogen via electrolysis and the transportation of liquefied hydrogen to rural areas with pipelines would be expensive. The production technology would be site specific and include steam reforming of methane and electrolysis in hydropower rich countries. In the long run, when hydrogen is a very common energy carrier, distribution with pipeline is probably the preferred option. The cost of hydrogen distribution and refueling is very site specific.

Ankit Kumar, studying at University School of Chemical Technology, GGSIP University, Delhi, India. He wants to pursue his career in biofuels technology.
👉See Also:
Biohydrogen - An alternative Renewable Energy Resource - An Overview
An article giving an overview of biohydrogen which can be used as a renewable fuel in future.
Petroleum Industry - An Overview.
The article gives an overview of the petroleum industry, types of sectors in this industry and its challenges and opportunities.
Economies of Petroleum Industry
Understanding Biofuel Policy: Shaping Up the 21st Century
Posted by www.eduvictors.in at 11:57