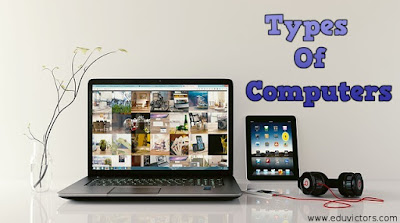 The computers can be divided into three broad groups - Digital, Analog and Hybrid.
A short summary on these groups is given below:

Digital Computer : Digital computer is a computer that represents information (numbers, characters and other data) using discrete internal states i.e., binary digits (0’s and 1’s). Accuracy of a digital computer is only limited to the size of its registers and memory.

Analog Computer: Analog computer is a computer that represents information by variable and continuous quantities such as electric current, voltage, positions. Accuracy of analog computer is very less, only one present approximately as compared to digital computer.

Micro Computer: A microcomputer is a computer that is built around a microprocessor (complete CPU on a single micro chip). A Personal Computer is a type of Micro computer. These can be further classified as:

① Palmtop Computer:  also known as palm-PC or PDA (Personal Digital Assistant), is a small general purpose, programmable battery powered computer which can be operated comfortably while held in one hand. Such computer uses WINDOWS-CE (stripped down version of Microsoft WINDOWS). These are somewhat obsolete now and have been replaced by tablets and smartphones.

Mini Computer : Mini computer is a deviation from single user concept of microcomputer in the sense that it can support several users working simultaneously on the same machine. It is mainly used as a departmental computer i.e., belonging to a group of people, and in all business organizations. Examples: PDP-8, PDP-II, VAX 7500, HLL HORIZO-III, HCL MAGNUM.

Super Computer: Most powerful of all above computers, super-computers are at the top in the terms of power, expense. They are applicable to areas that make massive amount of calculations, for example: Weather forecasting, economic forecasting, engineering design and testing serious decryption. Examples: Cray-I (World’s first super computer in 1976), Cray-2, Cray X-MP, Cray Y-MP, Cray Y-MP/C, Fujitsu VP 2600/10 , Hitachi 820/80. PARAM and ANURAG are super computers produced by Indian agencies like C-DAC.

Email ThisBlogThis!Share to TwitterShare to FacebookShare to Pinterest
Labels: BCA-Sem1, BTech-Sem1, Fundamentals Of Computing, Introduction To Computer and IT, MCA-Sem1