The A - Z of BIOPOLYMERS (#biotechnology)(#ipumusings)

A brief introduction about polymers, history and uses. 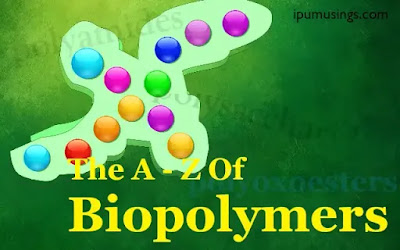 
Biopolymers are polymers produced by living organisms. Polymers are long molecules which are made by joining lots of smaller molecules in a single chain. It is a biodegradable chemical compound which is regarded as the most organic compound. The name Biopolymer indicates that it is a biodegradable polymer. Cellulose, chitin and starch, proteins and peptides, DNA and RNA are examples of biopolymers, in which the monomeric units are sugars, amino acids, and nucleotides.
Biopolymers and their derivatives are varied, plentiful, abundant and important for life. They exhibit the property of a wonderful and increasingly important for various applications. Besides being available on a sustainable basis, biopolymers have many economic and environmental advantages. Biopolymers could also prove a boon for waste processing. For example, replacing polyethylene used in coated papers by a biopolymer could help eliminate plastic scraps occurring in compost.
Living matter is able to synthesize an overwhelming variety of polymers, which can be divided into proteins and poly(amino acids), polysaccharides such as cellulose, starch and xanthan, alginate, carrageenan, organic polyoxoesters such as poly (hydroxyalkanoic acids), poly (malic acid) and cutin.
The term biopolymer is most commonly used when referring to the use of the materials in some practical, non-food application. When starch is used to make disposable utensils it might be called a biopolymer, but not normally when it is in bread, or in the tissue of a plant.

The history of Biopolymer is not long. Biopolymer are beginning to emerge as a result of needing to be more responsible in taking care of the world. Thus, the recent emergence of bio-based products rather than petroleum or based products. Various reasons are associated with the research and development of Biopolymers. The use of the biopolymers could markedly increase as durable versions are developed, and the cost to manufacture these bio-plastics continues to go fall. Bio-plastics could replace conventional plastics in the field of their applications also and can be used in different sectors such as food packaging, cups, plastic plates, plastic storage bags, other plastic or composite material items you are buying and therefore can help in making environment sustainable.

Polymeric biomaterials are synthetically derived polymers designed for various applications. Engineering the production of novel biopolymers in plants provides truly bio-renewable avenue for their synthesis. Microorganisms play a vital role in the production of a huge variety of biopolymers, such as polysaccharides, polyesters, and polyamides which varies from viscous solutions to plastics. The physical properties of microorganism are dependent on the composition and molecular weight of the polymer. The properties of biopolymers synthesized by the aid of microorganisms shall be tailored by the genetic manipulation of microorganisms, thereby making it suitable for high-value medical application such as tissue engineering and drug delivery. Biopolymers which are produced with the help of microorganisms require specific nutrients as well as a controlled environmental condition. They are produced either directly via fermentation or by chemical polymerization of monomers, which are in turn produced through fermentation. Many biopolymers are biocompatible with no adverse effects on biological systems. The mechanism of synthesis of biopolymers from the bacterial origin is believed to be either as a result of their defence mechanism. They can be degraded by natural processes, microorganisms, and enzymes so that it can be finally reabsorbed in the environment. Biopolymers or organic plastics are a form of plastics derived from renewable biomass sources such as vegetable oil, corn starch and so on. By shifting the focus more into the biopolymers, conservation of fossil resources and reduction in CO2 emissions can be achieved by promoting sustainable development. Among the microorganisms, algae are as an excellent feedstock for plastic production because of their high yield and the ability to grow in a range of environments. The use of algae opens up the possibility of utilizing carbon and neutralizing greenhouse gas emissions from factories or power plants. Algae-based plastics have been a recent trend in the era of bioplastics compared to traditional methods of utilizing feedstocks of corn and potatoes as plastics. While algae-based plastics are in their infancy. Currently, microbial plastics are considered as an important source of polymeric material that has a great potential for commercialization. They can modify flow characteristics of fluids, stabilize suspensions, flocculate particles, encapsulate materials, and produce emulsions.

USE OF BIOPOLYMER IN INDUSTRIES

Biopolymers have vast use in various industries, a few are depicted below: