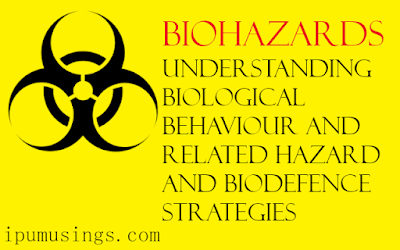 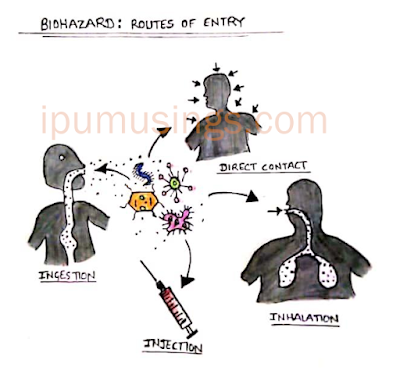 Microorganisms can enter the human body.
(a) Inhalation: by inhaling aerosolised biohazardous materials (0.003 μm 100 μm) that can be spores, dust, particulate, mists (tiny liquid droplets that are able to float in the air), and sprays, coughing, spittle, sputum, by technical process: blending, grinding, sonicating, lyophilizing, sawing, centrifuging, etc. These are some process and microscopic solid or liquid particles which remains dispersed and suspended in the air for a long period of time. Due to this, there can be irritation, an allergic reaction or other damage to the lungs, respiratory tract, and/or mucous membranes and the foreign substance may be absorbed into the bloodstream in the lungs and then distributed through the body.

(b) Ingestion/swallow hazard: it occurs by poor personal hygiene and poor laboratory practices generally include eating and drinking contaminated food and it is due to contact with unwashed hands, gloves or clothing, mouth pipetting and suction techniques, nail-biting as the transfer of microbes to mouth by contaminated fingers.

(c) Direct contact hazards: Enter in the body through the skin (contact of biological contamination with compromised skin), hair follicles, sweat glands. It occurs due to splash or spray of biohazardous material onto skin, eye, mouth (due to contact of biological contamination with mucus membranes of eyes, nose or mouth and the genitals), transfer or rubbing by contaminated fingers or gloved hand and handling contaminated equipment with unprotected non-intact skin.

(d) Injection or inoculation hazards: This occurs through a puncture, kicks, cut or abrasion of the skin involving a biologically contaminated object including animal bites/scratches. Inoculation with a hypodermic needle, broken glassware, scalpels, or other sharp instruments. Biohazardous material is accidentally introduced into the human body with contaminated objects (which has a high risk to health) through the intact skin barrier.

About Biohazard Term or Symbol

Biohazard term or its symbol is used for warning as labelled on biological material that contains significant health risk(e.g. viral samples, sharp waste). The use of the symbol is regulated by law and directed by standard organisations. The biohazard symbol was developed in 1966 by Charles Baldwin (an environmental-health engineer), working for the Dow Chemical Company on the containment products. In an article he wrote for Science in 1967, the symbol was presented as the new standard for all harmful biological materials ("biohazards"). In that article, he explained that over 40 symbols were drawn up by Dow artists, and the symbols had to meet a number of criteria:

• Striking in form for drawing immediate attention;
• Unique and unambiguous, so that there should be no confusion with other symbols used for other purposes;
• Quickly recognizable and easily recalled;
• Symmetric, in order to appear identical from all angles of the approach;

Biohazards/infective microorganisms are categorised into four types by risk groups that are as following:
Risk Group 1 (RG1): microorganisms of this group do not cause human or animal diseases.

Risk Group 2 (RG2): microorganisms of this group cause diseases in humans or animals but is unlikely to be a serious hazard and spread of infection is limited.

Risk Group 3 (RG3): microorganisms belong to this risk group cause serious diseases in human or animals. Vaccines and treatment of this infection may exist.

Risk Group 4 (RG4): pathogens of this group cause serious diseases in human or animal and travel from one body to another directly or indirectly and vaccine or treatment of this infection is usually not available.

Sweta Kumari doing her graduation from University School Of Chemical Technology, GGSIPU. She wants to pursue her research in bio-safety and environmental health.