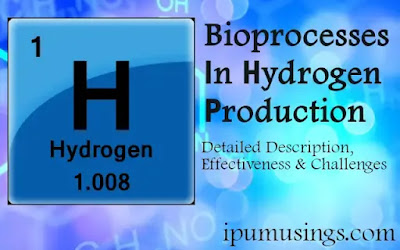 Hydrogen could also be made by a variety of processes, such as the electrolysis of water, thermocatalytic reformation of hydrogen-rich organic compounds and biological processes. Biological production of gas (Biohydrogen) offers a good variety of approaches to get gas, as well as direct biophotolysis, indirect biophotolysis, photo-fermentations and dark-fermentation.

Bioprocesses are useful in the hydrogen production because they usually operate at ambient temperature and pressure conditions i.e., these processes are not energy-intensive as compared to electrochemical or chemical processes for hydrogen production. Secondly, they utilise renewable energy sources such as biomass as well as waste to produce clean energy without greenhouse gases emissions. 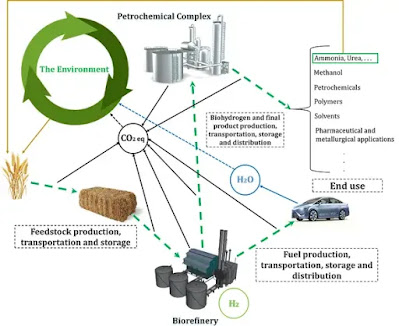 Cyanobacteria and green algae are used for the Direct Biophotolysis. Hydrogen production in these microorganisms is possible due to the presence of hydrogenase enzyme along with Photosystem 1 and Photosystem 2 with the help of light and dark reactions. This hydrogenase enzyme is absent in the plants. Hydrogen is a production by acceptance of electrons ferredoxin by hydrogenase, utilising ATP generated by the breakdown of water into oxygen and proton. In the aerobic conditions and in the presence of light the electrons from the protons are used for CO₂ fixation into carbohydrates whereas in the dark (which leads to the activation of hydrogenase), hydrogen gas is evolved.

Direct Biophotolysis is a promising biohydrogen production process due to cheap and abundant water as a feedstock and production of high purity hydrogen (up to 98%). But the challenge lies in maintaining very low concentrations of Oxygen which are produced simultaneously with hydrogen.

In this process, carbohydrate generated during CO₂ fixation is used in the hydrogen generation by dark anaerobic fermentation.

Many green algae and cyanobacteria also have the ability to fix nitrogen. This helps to catalyse hydrogen production in an oxygen-free environment i.e., in heterocyst.

This method can become a practical method for obtaining Biohydrogen if proton conversion efficiency is improved using large size biophotoreactors.

Purple nonsulphur bacteria is used preferably for the photo fermentation process. These bacteria have a single photosystem(PS) which helps in overcoming oxygen inhibition effect altogether as compared to algae used in biophotolysis process. PNS bacteria can utilise organic waste or other cheaper carbon source as a substrate and use hydrogen disulphide and simple organic acids derived from them as electron acceptors. The equation involves in the fermentation process is as follows.

The biochemical pathway is be given by:

This bioprocess has several drawbacks such as low photochemical efficiencies (three to ten per cent), discriminate light distribution over the microbial culture in the reactor which further leads to the lowering of light conversion efficiency. A large surface area is required to construct photobioreactor with a high surface/volume ratio for homogeneous absorption of light by the culture which is expensive.

In order to improve the overall process efficiency, co-cultures with different light utilization capacities can be used with optimal Carbon to nitrogen ratio which further controls the activity of nitrogenase(maximal) and hydrogenase (minimal) for maximum production of biohydrogen.

Cannon Monoxide can also be utilised through the PNS bacteria which can give 96 moles of H₂/liter-hour.

In this bioprocess, typical glycolytic pathway using glucose as a preferred substrate is followed by anaerobic digestion. This anaerobic digestion gives rise to the production of acetic acid and butyric acid simultaneously along with hydrogen as a by-product. More hydrogen is evolved in case of acetic acid production as compared to butyric acid production. The reactions involved are as follows:

Among all the above-mentioned methods dark Fermentation method is the most promising as it can also process various organic wastes as a substrate such as molasses. Also, the organic acids produced during the process can also be converted in Biohydrogen by further using  Photofermentation method. Also, the yield through this bioprocess is highest among all.

Flow chart of bioprocesses involved in biohydrogen production with their merits and challenges. 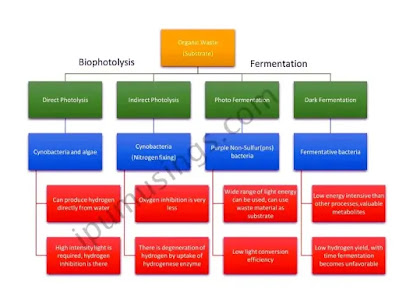 Pavitra Khurana, studying at University School of Chemical Technology, GGSIP University, Delhi, India.
👉See Also:
Biohydrogen - An alternative Renewable Energy Resource - An Overview
An article giving an overview of biohydrogen which can be used as a renewable fuel in future.
Posted by www.eduvictors.in at 07:13