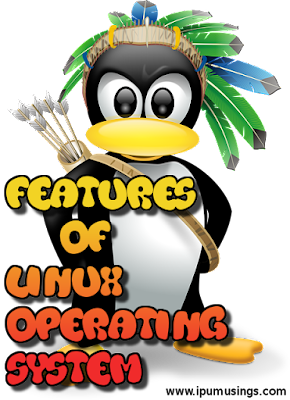 Linux operating systems has world wide use. It’s the operating system used by more than 95% of the world’s supercomputers. World's leading IT companies like Google, Facebook, Netflix use Linux extensively. Android OS is another flavour of Linux OS.
Following are the important features of Linux Operating System:

② Multiuser : several users can work on the same server machine at the same time (and no two-user licenses!).

③ Multi-platform: runs on many different CPUs, not just Intel.

④ Multiprocessor/multi-threading: it has native kernel support for multiple independent threads of control within a single process memory space.

⑤ Protected Memory Process: It has memory protection between processes, so that one program can't bring the whole system down.

⑥ Demand load executable : Linux only reads from disk those parts of a program that
are actually used

⑦ Shared copy-on-write pages among executable binaries. This means that multiple process can use the same memory to run in. When one tries to write to that memory, that page (4KB piece of memory) is copied somewhere else. Copy-on-write has two benefits: increasing speed and decreasing memory use.

⑧ Virtual memory using paging (not swapping whole processes) to disk: to a separate partition or a file in the file system, or both, with the possibility of adding more swapping areas during runtime . A unified memory pool for user programs and disk cache, so that all free memory can be used for caching, and the cache can be reduced when running
large programs.

⑨ Open Source: All binaries including kernel, drivers, applications come along with source code it is freely distributable.

⑩ Multiple virtual consoles: several independent login sessions through the console are allowed, you switch by pressing a hot-key combination.