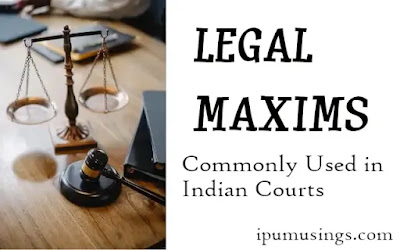 What are Legal maxims?

Most of the legal maxims are Latin phrases that represents a legal definition in concise form. Legal maxims are established principles of law that are universally admitted, and people in the legal field are very well aware of these words.

If you have watched 'Suits' TV series, you might have seen, often legal maxims are mentioned in dialogues. Let us see a few famous ones here:

"The case is now sub judice. I cannnot give my comments now", says the tainted minister.

In law, sub judice, Latin for "under a judge", means that a particular case or matter is under trial or being considered by a judge or court. The sub judice rule is an extension of the common law rule that the proper administration of justice may not be prejudiced or interfered with.

Pro bono publico  means "for the public good" in English. Some times "pro bono" is also used.  It is a Latin phrase for professional work undertaken voluntarily and without payment.  In the legal context it generally means the provision of legal services on a free or significantly reduced fee basis, with no expectation of a commercial return.

It means "From the very beginning or inception". In law, ab initio refers to something being the case from the start or from the instant of the act rather than from when the court declared it so. It leads us to believe that the validity of agreements can be decided in the very beginning itself.

In Pubjab-Haryana High Court Judgement "Manjeet Singh vs Parson Kaur on 16 March, 1990", The trial Court found that the husband was already married. The judgment mentioned "Void marriages are void ab initio which means that in the eye of law that marriage has never come into being...".

It means ‘Hear the other side too’. It is, one of the three principles of natural justice, that no person should be judged without a fair hearing in which each party is given the opportunity to respond to the evidence against them. In India, the principles of natural justice are the grounds of Article 14 and 21 of the Constitution. Article 14 emphasises that every person should be treated equally.

It means “In absence” or more fully, in the absence of the person involved. The Indian legal system does not unequivocally provide for trial in absentia of the accused. Courts do not try or sentence an accused in absentia (with exceptions in some cases).

It means ‘Sincere, in goodfaith’. In legal terms, it is often used to refer to a buyer or holder who takes something without fraud, deceit, or knowledge of a lien or superior claim by another. It implies that an act being made or carried out in good faith that is, one which lacks an intention to deceive.