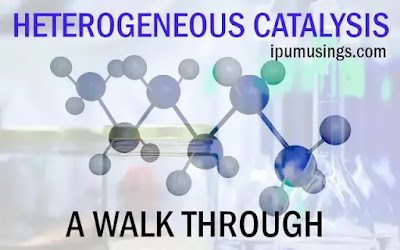 Adding a metal during a reaction and getting extraordinary results made Joseph and Martinus analyze it. They were unaware of the actual reason behind it and thought they are only providing the energy to the reactants. In 1813, Thenard during ammonia preparation for the first time reported on heterogeneous catalysis and the use of solid metals as catalysts.

Many solid compounds and metals show catalytic properties because of their physical and chemical structure. The Catalysis of the reaction using solid catalysts where the reactants and products are in different phases is heterogeneous catalysis. The reactants are usually gaseous or solvent molecules. The differences in the phase make the intermediate easier to detach from the catalyst surface and hence increasing the efficiency of the catalyst.

Heterogeneous catalysis finds it's a major utility in refineries and industries in cracking and reforming of the crude oil. Certain reactions of economic importance use heterogeneous catalysts and are of great importance to the worldfs economy with applications in chemical, petroleum, polymer, textile, plant operation, and various synthesizers.

Catalysts are materials that carry out the reaction in several alternate steps, altering the kinetics of the reaction and regenerated at the end of the cycle as fine particles with the gas. Catalysts lower the energy of activation. They increase the rate at which it attains equilibrium and does not change the position of the equilibrium. Thus they do not change the thermodynamics of the reaction. The pores present at the surface of the solid catalyst are responsible for the catalytic activity; because of the prime surface area, the number of pores or active sites is greater, which increases the activity of the catalyst. But because of the impurities and defects in the material, the number of sites can not be estimated properly, and hence it becomes difficult to calculate the activity of the catalyst. A good catalyst must yield fewer byproducts achieving the reaction rate at stable conditions and possess an adequate number of interactions. This is the principle of Sabatier which applies to a working catalyst.

Reactions undergo several elementary steps to alter the rate of the reaction in the presence of a catalyst. The active pores of the catalyst interact with the reactants and form products which are released later on.  Mechanism of heterogeneous catalysis given by Langmuir and Hinshelwood involves various steps, these steps undergo are:

1) Diffusion: The catalyst attracts the reactant particle and diffuses at the surface.

2) Adsorption: The reactants get adsorbed over the active sites of the catalyst.

4) Desorption: The formed products are then desorbed and get detached through the catalyst surface.

5) Diffusion of products from the surface of the catalyst.

The rate of the reaction can be determined by assuming the following points:

1) The rate-determining step is the reaction occurring at the surface in which molecules get attached to the surface.

2) The molecules are held on the surface by chemical bonds. Thus it leads to chemisorption and formation of a monolayer at the surface of the catalyst.

1) Surface type catalysis: Reactants get adsorbed on the surface of the solid and react on it. The rate of the reaction is proportional to the surface area of the solid. For example, oxidation of aldehydes and CO.

3) Bulk type II: The primary reaction occurs at the surface of the solid, but the entire volume of the solid takes part in catalytic activity thus, referred to as bulk type catalysis. Certain oxidation reactions take place with this mechanism, and the rate of the reaction is proportional to the bulk volume.

Some industrial preparations where heterogeneous catalysis is widely used are listed below.

■ Ammonia synthesis by Haber-Bosch process. He used iron oxides and alumina as catalysts with Nitrogen gas and Hydrogen gas to give ammonia.

It uses mixed oxides of Cu, Zn, Cr as catalysts.

This reaction is used to produce H₂ gas from fossil fuels. The H₂ produced is further used in the Fischer-Tropsch process.

■  In the automobile industry-

Oxidation of Carbon Monoxide to give Carbon dioxide

■  Oxidation of hydrocarbons such as petrol and diesel

Enzyme Catalysis - A Brief Introduction.
The article gives a thorough understanding of Enzyme Catalysis and its mechanism of working.
Food Packaging - Technology Used in Food Biotechnology - The article by Manan Batra gives a brief overview of food packaging.