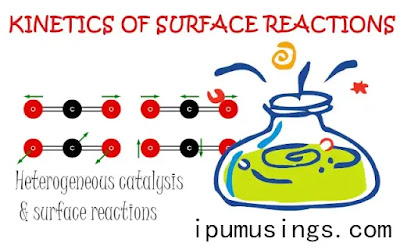 Surface reaction plays a vital role in the catalysis mechanism. Especially in heterogeneous catalysis, various elementary steps occur at the surface of the crystal, and kinetics of the reactions depend on surface phenomena such as adsorption, forming of intermediates and products, and desorption.

On account of surface compositions and structure, the catalyst shows properties of enhancing the rate of the reaction. Langmuir gave a theory of heterogeneous catalysis in which he stated that reactants are chemisorbed through the pores of the catalyst crystal. The assumptions of the Langmuir and Hinshelwood model gives the kinetics of the catalyzed reactions.

In heterogeneous catalysis, we use solid catalysts for the catalysis of reactions where reactants are in the gaseous phase. The composition and structure of the crystal are responsible for the catalytic activity of the solid metals. The pores in the crystal have various point defects and irregularities in it which controls the catalytic activity. The reactants get adsorbed at the active sites and react. They form intermediates which are then converted to products and are desorbed from the surface. Thus surface plays an important role in estimating the kinetics of the reaction. The rate of the catalyzed reactions is based on the following assumptions.

The molecules are adsorbed chemically on the active sites and form a monolayer on the solid surface. The rate of the reaction depends on the fraction of molecules adsorbed and follows Langmuir’s adsorption isotherm.

In heterogeneous catalysis, there are two types of reactions depending on the number of interacting molecules.

The reaction between one molecule and the active site of the catalyst surface.

Molecule A gets adsorbed over the solid surface.

Then the formed intermediate AS gets desorbed from the surface and undergoes associative desorption.

The intermediate AS decomposes and forms the products. 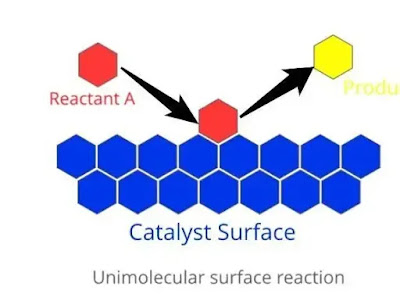 Decomposition of ammonia is a unimolecular reaction on Molybdenum's surface.

Here two molecules, A and B, take part in the reaction. According to Langmuir-Hinshelwood’s assumptions, these two molecules occupy the adjacent sites on the surface.

We can represent the reactions in the following steps:

Molecule A adsorbed on the surface forming intermediate AS.

Molecule B adsorbed on the surface forming intermediate BS.

Intermediates AS and BS decomposes to products and is desorbed from the surface giving vacant surface S. 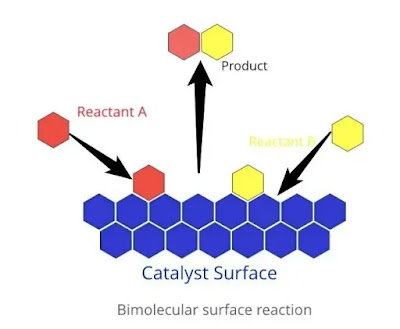 The reaction between H₂ and O₂ on a platinum surface is an example of a bimolecular surface reaction.

The kinetic equations can be calculated by considering Langmuir-Hinshelwood assumptions and steady-state approximations. Rate, r for the reaction between reactant A and catalyst surface S can be mathematically written as;

Where k is the rate constant of the reaction. 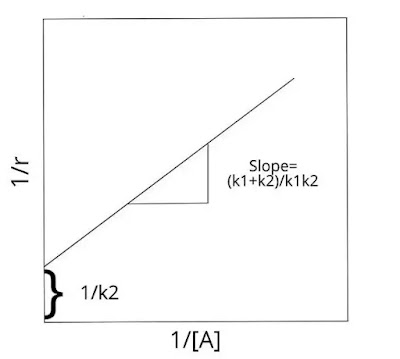 The above equation can be represented in terms of partial pressure

Where pA is the partial pressure of the reactant molecule 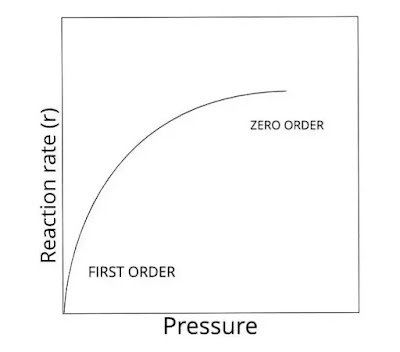 Complexities in the Reaction Kinetics

In ideal conditions, for a uniform surface and ideal adsorption. That follows Langmuir’s isotherms and are at the stable condition it is easier to calculate the kinetics of the reaction for surface processes.

a) Surface complexities or surface heterogeneity

The sites of the catalyst surface may have various defects which deviate the kinetics of the reaction from Langmuir’s adsorbed layer.

b) Lateral interactions among adsorbents (reactants)

Because of the lateral interactions between the adsorbents, the molecules can not be easily desorbed making the rate of desorption complex.

When multiple layers of molecules are adsorbed on the surface. The reactant’s mobility decreases and forms a cluster or island of molecules.

1. Impact of surface science on the understanding of the kinetics of heterogeneous catalytic reaction by Vladimir P. Zhdanov weblink