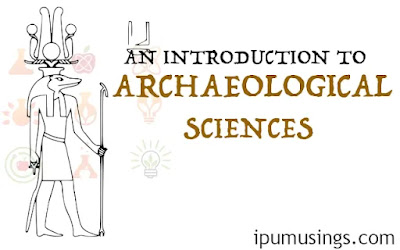 Archaeological sites are an amalgam of material evidence that has survived through time since the site was created, occupied and finally abandoned. The relics that are excavated need to be stabilised and examined to determine their archaeological significance. The entire process varies depending on the nature of the artefact. A significant factor is depositional as well as post-depositional geochemistry. It was not uncommon in antiquity for people to repair utilitarian objects as well as valued possessions. Now, this particular brings our attention to an important question-if they were attempts to restore antiquities or merely efforts to prolong its life.

An intangible relationship between aesthetics and emotional perception has driven the archaeological sciences to this point. The ubiquitous sense of belongingness, responsibility, and acceptance stimulated upon seeing a relic exhibited in museums thwarts the scientists and researchers into resorting to the precincts of advanced technologies to act as a suitable platform of great antiquity. The accolade of public outreach has recently produced a great deal of research in the display of art and artefact, illuminating the enduring tensions between aesthetic and narrative models of the exhibition. The journey of a relic from an excavation site to a museum demands the pragmatic approach of infusing all the branches of science. Archaeological sites have long been an indispensable subset of heritage tourism. However, current concern boasts a conscious realisation among the public and professionals that archaeological sites, like the natural environment, represent non-renewable resources deteriorating at an increasing rate. This deterioration can be assimilated by projecting the light on a wide array of causes, ranging from neglect and poor management to increased visiting and vandalism, from inappropriate past treatments to the expiry of treatment lifespan. It is difficult, if not impossible, to determine with any certainty just exactly when archaeological conservation actually began.

The fragility of a relic is dependent upon the method of its production, the condition of its burial and its environment. The preservation of evidence will vary according to the chemistry and, to some extent, the microbiology of the burial environment, the soil conditions and the site hydrology. When an object is excavated it will have reached an equilibrium with its surroundings, which means that the processes of decay are at a standstill. This equilibrium may have been attained for two reasons; first, it could be that the particular process may have proceeded to completion giving rise to alteration products that are stable in the burial environment; and second that the decay process has stopped because of a shortage of any one of the agents of decay. Typical examples of objects which stabilise because decay processes have proceeded to completion are the corrosion of metals. Pottery, contrariwise, is usually stable in the ground under most conditions of deposition geology, although it may break into fragments because of the weight of the soil pressing down on it. Once an object is excavated, the equilibrium which has been established with the environment is disturbed and the process of deterioration commences. After being excavated, it is in this period of being moved to museums, that the safety of innumerable relics of historical importance has been jeopardised owing to improper handling and careless storage.

The pre-requisites of pre-excavation of a site are the facilities and funds to ensure that all the tedious efforts lead to success. Without due thought being given to conservation before excavation, unprecedented disaster can occur on-site when unpredictable materials and conditions are found and there is no equipment or personnel available to deal with them.

On-site conservation is perhaps the most critical stage of all. Many materials are likely to initiate the course of fragmentation when first exposed to the atmosphere after many centuries of burial. They begin to dry out and shrink or react with the air as they lose the support of the surrounding soil. Thus, the moment an exposure happens, on-site conservation begins. An apt example would be waterlogged wood, which is derived from the possibility of excavating shipwreck underwater. The wood usually retains its shape but then exhibits an uncanniness of a sponge full of water, and if the water is allowed to dry the wood will shrink to a fraction of its former size. Once lifted, either by hand or with support, materials are preserved by good packaging and if necessary, controlling their environment. To ensure the maximum potential information is obtained, as much deposit as possible is allowed to adhere to an object when it is lifted and packed.

On top of the necessary field tools (shovel, trowels, brushes, etc.) used by archaeologists on site, scientists in laboratories resort to analytical instruments and equipment, which brings in an entirely different edge of chemistry into play, distinguishing the option from superannuated approaches. The instrumentality utile for purpose of chemical analysis can be discretely bifurcated into two methods:

Spectroscopes (tantamount: spectrometer) are generally used for elemental analyses. Spectroscopic methods inspect the interaction between atoms and light and are defined primarily by the portion of the electromagnetic spectrum that they use. To define an inorganic mineral compound its crystal structure, as well as elemental composition, holds significance. 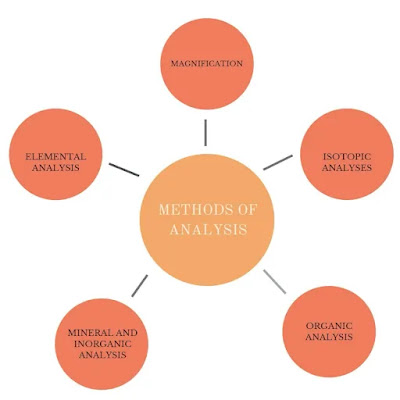 Petrographic microscope and XRD are employed to reveal the crystalline structure and infrared (IR) spectroscopic techniques to reveal the kinds of chemical bonds in the crystal Following are the methods of analysis:

Microscopes are used for the comprehensive investigation of the surfaces of archaeological entities and to obtain visual information through magnification. This can be handy when examining items like seeds, pottery, plant pollen, stone tools, bone, textiles, metalwork, etc.

OPTICAL MICROSCOPE: An optical microscope uses lenses at the ends of a hollow tube to magnify an object. Binocular microscopes are ideal for examining a range of archaeologically diverse materials including plant remains, small artefacts, use-wear, and cut marks. A standard, the single-tube optical microscope has no depth in the field of view i.e., any object or part of an object extending above or below this plane is out of focus and the thickness of this plane diminishes rapidly with increasing magnification. A binocular microscope, with two independent tubes, focused on the same object, magnifies and projects the result in three dimensions.

SCANNING ELECTRON MICROSCOPE: The SEM creates magnified images using high-energy electrons, instead of light waves. Although the SEM is capable of extremely high magnification its utility for the archaeologist does not rely on this high magnification, but on its depth of field. SEM is used for spores, pollen, seeds, and for studying in high detail microscopic features such as the grooves made by tools and animal teeth.

SPECTROSCOPY: Each atom has a unique pattern of emission lines around the visible region of the spectrum, thereby allowing chemical identity to be established by simply comparing these patterns of emission or absorption. Spectroscopy quantifies changes in atoms that cause an exclusive light photon to be either absorbed or emitted. It is a widely used field test for soil phosphate.

ICP-OES: Emission spectrometer (inductively coupled plasma-optical emission spectroscopy, or ICP-OES) atomises a sample by passing an electric current into a gas plasma that contains the sample. In this method, the sample is heated up to a high temperature. At this temperature, the individual elements glow with their representative colours. Preferably, in an ideal situation, an emission source should atomise a sample completely and provide a stable signal over a wide range of concentrations. Emission spectroscopy is generally preferred to measure concentrations of a wide range of elements.

X-RAY FLUORESCENCE SPECTROSCOPY:  XRF is similar to optical emission spectroscopy, but instead of electric currents, X-rays are used to excite atoms. There is a distinctive indicative X-ray for each element. The intensity of resulting X-rays of particular energy can then be measured to establish the copiousness of that particular element. XRF comes in handy for archaeological materials such as ceramics and stones.

ISOTOPES ANALYSES: Technically the number of protons in the atomic nucleus defines the chemical properties and the identity of an element, but for the same number of protons in the nucleus, there can be different numbers of neutrons, resulting in isotopes. Isotope measurements are a ratio of one isotope to another. Regardless of the amount of material measured or the concentration of the element present, this isotope ratio is used to standardise the value that is reported. Oxygen isotopes are used in archaeology primarily to study antediluvian environments and to track human diaspora. Carbon and nitrogen isotopes in archaeology are used predominantly for impeccably predicting archaic dietary patterns and requirements, but there are also important applications that concern environments and human activity from an archaeological perspective. Strontium isotopes have been used primarily in probing the history of humans ensconcing in the past.

Archaeological sciences is a unification of two meticulously methodical disciplines. To adumbrate, the application of advanced analytical methods based on principles of chemistry proves to be accurately insightful. The result-oriented discipline, unravelling the primordial outline of archetype, requires expertise in both archaeology as well as chemistry. But given the status quo, only a handful of people hold the proficiency to suit the criteria. Contemporarily, relics on a large scale are being excavated and cleaned to prevent any further deterioration. The current practices of analysis and examination are not substantial enough; preservation techniques are being remodelled so that posterity with an advanced approach can uphold the principles thereafter.