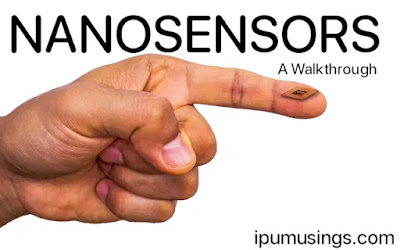 Advantages of such small size materials with varying properties from bulk, nano-objects that are lighter, faster in the applications, cheaper as well more efficient with enhanced properties is a hot topic for research and development.

Therefore it is crucial to study the effects of such novel particles in-depth and incorporate these exceptional fun-size particles into our daily lives to enhance the quality of life. And to ascertain and gauge the remarkable effects at the nanoscale level is where nanosensors come in. The essence of a sensor is to detect changes in the environment and respond proportionally to some other system. Nanosensors serve the same purpose. They are nanoscale constructs or larger sensors that contain nanoscale features to detect the events at the nanoscale. Nanosensors convey the information and data at the nano level to the macroscopic level.

Nanosensors have been developed for the detection of gases, chemical, biochemical, as well as physical variables such as-

(1) To detect various chemicals in gases or liquids for pollution monitoring(e.g. water treatment)

(2) For medical diagnostic purposes either as bloodborne sensors or in lab-on-a-chip type devices for pathogen or diseased tissue/cell detection.

(3) To monitor physical parameters such as displacement, temperature, and flow.

(4) As MEMS devices that can sense, control, and actuate on the micro-scale, and generate effects on the macro scale, like airbag sensors.

(5) To monitor plant signalling and metabolism to understand plant biology

(6) To study neurotransmitters in the brain for understanding neurophysiology

Apart from the above-mentioned features, nanosensors could also be used for the detection of electromagnetic radiation. Imaging-based or optical nanosensors work on imaging-based signal transduction mechanisms such as fluorescence, plasmonics, magnetic resonance imaging (MRI)-, and photoacoustics (PA)-based sensing.

There are several classifications of nanosensors, based on Structure, Application, Receptor molecule, and the basis of energy.

Based on structure, nanosensors can be subdivided into four categories, namely-

(iii) mechanical or vibrational, and

Optical nanosensors transduce a chemical or biological stimuli/signal using an optical signal, having all dimensions less than 1000 nm. The first reported optical nanosensor was fluorescein-based. When trapped within a polyacrylamide nanoparticle it was capable of pH measurement. Because of the high sensitivity and relative ease of measurement, the current method of transduction is fluorescence.

There are two subdivisions to this category of sensors based on the mechanism of detection, i.e.

(1) monitoring via electrical current measurement and

Magnetic nanosensors consist of magnetic nanoparticles such as iron oxide, which when bonded to the intended target form a stable system or nano assemblies, which in turn leads to a decrease in spin-spin relaxation time of the surrounding medium (usually water molecules). This decrease or change can be measured by magnetic resonance techniques.

Based on Application, sensors can be-

(1) Chemical nanosensors—This type can be applied to analyze a single chemical or molecule. Several different optical chemical nanosensors were used for measuring some properties such as pH, and various ion concentrations. Many nanomaterials have a high electrical conductivity, which reduces upon binding or adsorption of a molecule, this detectable change is measured. Nanowires and nanotubes are excellent examples of chemical nanosensors, as they can act as both the transducer and the electronic wires once an analyte has been detected.

(2)Deployable nanosensors—This type is used in defence, military operations, such as detection of chemical-based weapons or landmines, etc. which are characterized by a lightweight, portable chemical detection system that combines nanomaterials for sample collection and a concentration with a microelectromechanical detector.

Biosensors—sometimes are included in chemical sensors due to similar transduction methods. It is one of the most common sensors used due to the possibilities of early cancer detection and detection of other various diseases. These can also be used to detect a specific type of DNA. Within different kinds of developed biosensing technologies, field-effect transistors (FET) have many advantages such as; ultrasensitivity detection, mass production capability, and low cost, etc.

Based on Receptor molecule-

(1) Affinity-based nanosensors- include hormones, antibodies, and nucleic acid receptors that bind to a molecule of interest irreversibly and non-catalytically.

According to energy source:

(1) Active nanosensors that need an additional energy source such as a thermistor, and

(2) Passive nanosensors where no additional energy source is required, such as a thermocouple, and piezoelectric sensor.

Anushka Singh, a graduate student of the University School of Chemical Technology, GGSIP University, Delhi. She is pursuing her degree in chemical engineering.

📌  The A - Z of BIOPOLYMERS
📌  Role of Nanobiotechnology in Biopharmaceuticals
Posted by www.eduvictors.in at 21:46