SOCIAL MEDIA CRIME AGAINST INDIAN WOMEN: HOW YOU SHOULD REPORT IT? (#VAWG)(#cyberviolence)(#cybercrime)(#ipumusings)(#eduvictors)

SOCIAL MEDIA CRIME AGAINST INDIAN WOMEN: HOW YOU SHOULD REPORT IT? 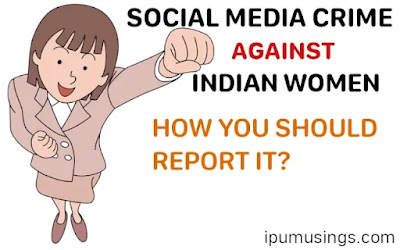 ‘Nothing is constant except change’- Heraclitus. Change is the inevitable reality of life; everything we could possibly just dream of years ago can be done now with much ease. One such example of the astonishing transformations is the innovation in the technological field. While years ago when people could only imagine if they could shop groceries without moving out in the hot and humid weather today’s technology not only allows ease in shopping but also in various other fields like education and job opportunities. The digital world has also gained immense prominence in the society especially amongst the youth.

The cyberspace is a whole new world offering new opportunities and benefits. In the present era, where the whole world is shut down because of the global pandemic the cyberspace has proved its worth by granting access to the people to resume their tasks on a substitute platform. From shopping and accessing essential services on this online portal to reaping the benefits of e-learning, change has proved to be valuable. Regardless the unquestionable advantages the online platform sets forth, the digital platform like every cloud has a silver lining. The cyberspace is now being used as a portal for committing some illegal and unlawful offences. The offences that initially only existed in the physical world have now paved their way to the digital world. Cybercrimes have surged and become a potential threat to the consumers. According to a survey the damage caused by the cybercrimes is estimated to increase by 15% per year and reach a greater magnitude by 2025. The rampant use of the digital platform has started raising security concerns as activities like data breaches, identity theft; digital robberies are increasing at a rapid pace. In addition to these, the rate of gender sensitive cybercrimes targeting women has also amplified. Over 60% of the women worldwide have been target to some violence on social media, affecting their mental health and ultimately forcing them to shut down their accounts. Many women have tried to rise above and scroll through such nasty comments they usually face on their social media platforms with partial attention but, whatever is seen goes in and adds to their mental agony including drastic and fatal outcomes like traumatic brain injury, depression and even suicide. The root causes of the violence faced by women are socio-political in nature like gender inequality and unequal power between men and women. The online misogyny is like a disease gone viral; an absolute tragedy and it is paramount that it ends.

In a country like India where the status of women is considered divine and they are venerated as goddesses it is unfortunate to observe them treated with such humiliation and constant discrimination because of the patriarchal mind set. According to the National crime record bureau a total of 4,05,861 cases of crime against women were registered in 2019 with 7.3% increase over 2018. In the modern digital era our changing relationships with violence needs to be analysed carefully.

Let’s understand it through an example. Richa, a young 18 year old girl and an aspiring fashion designer made accounts on various social media platforms to share her work and pave her way in the fashion industry. However, few months later she started receiving unsolicited messages from unknown users which deeply affected her mental health. Even though she ignored some of these messages, they still drew her attention and traumatized her to such an extent that she had to shut down her account and struggled with depression and hypertension for a long time. Now, this situation feels familiar to many women, right? In today’s scenario the gender based violence is increasing at such a rapid pace specifically targeting women inflicting physical, mental (psychological) or sexual harm to them through any means either physically or through information and communication technology. According to a survey over 73% of the women globally are subject to different forms of online violence. Women in the age group of 18-25 years are most exposed to different sorts of cyber violence commonly cyber stalking and cyber harassment. While on one hand although the massive reach of internet can be used to address the violence against women and girls (VAWG) on the rough side it has become one key platform used by the perpetrators. The cyber VAWG results in severe social, psychological and economic implications on the victims having a worse impact on the advocacy of human rights. The increasing figures are a matter of great concern and need the assistance of the law enforcement agencies to address the same with solutions to eradicate this problem sooner than ever.

The gender based violence is a repercussion of the prevalent atrocities and stereotypes present in the society. The catastrophic fate of women as a cause and consequence of gender inequality can be traced from time immemorial. A research done by the WHO revealed that 1 in 3 women are subject to some sort of violence in their entire lifetime. Violence against women and girls has no national boundaries or jurisdictions but when coupled with factors like race, cast or culture harms the individuals to a dehumanised extent. VAWG harms both men and women of across generations in different ways and referring it to as a women’s issue is an even bigger problem. Boys who grow up watching their fathers abusing or torturing their mothers are likely to be abusive in their own relationships. However, if we represent VAWG as a disease, it reframes our problem and highlights the urgency of global commitment to eradicate the same. In the current digital era, VAWG has spawned its way to the digital platform emerging as a global issue in need of immediate action. The commission of VAWG via online platform is not be our primary target rather eradicating concepts of gender inequality; patriarchal mind set should be focused on first. Like different strains of a virus there are different forms of cyber VAWG-

‘Prevention is better than cure’. At an individual level there are few precautions we have in hand to avoid being victim to such cybercrimes-

HOW TO DEAL WITH VAWG

Cybercrime and violence against women and girls has become a global issue and needs support of every individual to terminate the serious implications that it leads. It has found its way to even the most remote areas of the world. The gender based violence is promoted by the stereotypical social norms of the society that focus on a woman’s sexual purity and family’s honour rather than her safety; that fail to stop the perpetrator but continue to question and judge the woman’s character. It is because of the societal norms like these that transgress a woman’s humanitarian rights and forbid her from informing the same. Most of these offenses go unreported. What is more tragic is that the victims encounter lack of resources and knowledge to the redressal system. The structural and systematic failure of the law negates the chance of the women’s access to justice. The prevailing attitude of gender bias and discrimination promotes the wrong intention and acts of the perpetrators. However the wide reach of internet has proposed an opportunity to address VAWG. Efforts should be made by the law enforcement agencies to create awareness amongst the individuals to combat the gaps of gender inequality amongst potential victims. The authorities should hire professionals who ensure proper prevention, protection and prosecution of the perpetrators. Global commitment, investment of resources and access to legal authorities can help to an unimaginable extent to mitigate such activities. A piece of advice by Alice Han –“Just like we can vaccinate against viral diseases, we can vaccinate to prevent cases of VAWG by education and interventions aimed at gender inequality and other root causes.” Designing effective policy interventions at various sectors of the society like health sector, justice system on cyber VAWG and initiating awareness programmes can make a huge difference. Not only women but also men must be a part of this cure to make this education drive more effective.

In the modern digital era the cyberspace has led to a steep increase in the number of cybercrimes. Due to the patriarchal mind set of the society the range of gender based violence is constantly increasing leading to a rise in the victimisation of women across the world. Cybercrimes have been reported as a global pandemic and the woman and young girls have been its soft target for a while now. The gender based VAWG has become an emerging issue which needs the support of all the individuals at their personal level to curb and eradiate this evil. The government of India in its constitution guarantees an equal status to all in aspects of opportunities and treatment and is still undergoing making of laws to curtail the expansion of such evil activities and protect the rights of women at all stages. At an international level the UN has formulated various conventions and laws to eradicate VAWG and provide woman a life full of dignity and respect as they deserve as their basic fundamental right.

Violence against women: Where are the solutions? - Indira Sharma (see post)

1. Cybercrimes Associated with Digital Identity.
The article emphasises why digital identity is a valuable commodity and Cybercrimes associated with it.
2. Digital Robberies - How Vulnerable ATMs Are?
3. HRM Role and Occupational Health and Safety