AROMATICITY: WHAT DOES IT HIDE? (#organicchemistry)(#aromaticity)(#biochemistry)(#ipumusings)

AROMATICITY: WHAT DOES IT HIDE? 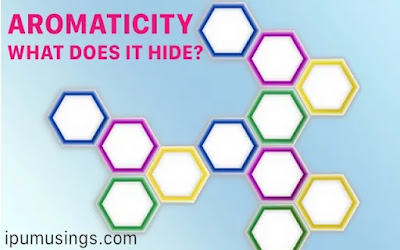 For a long time, What we thought was that aromaticity was just a characteristic of a cyclic as well as a planar molecule wherein, a phenomenon called resonance is observed that leads to comparatively more stability of these compounds compared to other compounds existent, be it linear ones or any other form.

It is said that these sets of compounds are very much stable and do not break easily as their bonds are due to the resonance effect.

Now the question arises what is it actually and what does it hide?

After so many years of researches, Aromaticity can now be said as a type of conjugation that is capable of generating closed two or three-dimensional electronic circuits.

We also know that phenomena like hyperconjugation, conjugation and aromaticity etc can stabilise interactions in any compound, so the presence of conjugation in the aromatic molecules explains their greater amount of stability.

Most of the aromatic compounds consist of a benzene ring or more rings as a central part of them.

The cyclic structure called benzene was developed by Sir August Kekulé in the year 1865 since then there is no turning back.

The next research shifts to Michael Faraday who in 1825 discovered the almond-like aroma of benzene, he also named it a Bicarburet of the hydrogen atom and he also suggested that the ratio of carbon to hydrogen stood at 2:1 for this almond smelling wonder compound.

THE RING: WHAT DOES IT CONSIST OF?

The 1930s came up with the quantum theory of chemical bonding and then the structure of benzene with electrons as its components were found.

Sir Kekule found two almost similar but actually many different structures of benzene but then Sir Linus Pauling discovered his theory that both of these structures were interconvertible via the phenomena of resonance which cleared the increased stability doubts of benzene.

Sir Erich Huckel, through his findings, indicated that benzene consisted of Sigma bonds between carbons as well as rings of Pi electrons from the 2p electrons overlapping over the plane of nuclei of atoms.

The presence of Pi electrons leads to electro-magnetic properties of the ring which lead to the development of the NMR spectroscopy method which could also be used to test the aromaticity of an organic compound.

While all the other methods of testing the Organic compounds on the basis of different bond lengths, energy etc showed no unique behaviour.

The unique element was actually the quantum form of the bonding.

The symmetry of the ring was based on the fact of the closed-circuit formation of the moving electrons will be limited at thoughts to the fact that planar rings had to have (4n+2) pi electrons but this condition doesn't hold as of now.

For example, a Mobius strip can attain stability just like the aromatic molecules although it had 4n pi electrons.

This could be achieved by a single twisting of the molecule.

WHAT ARE THE DRAWBACKS OF AROMATICITY?

1.  Over the years, there have been enormous amounts of different concepts related to aromaticity by various scientists like Krygowski and Cyranski in 2001 as well as Mitchell in 2001 etc.

This can lead to greater confusion in the concepts of structures related to organic chemistry making it a major drawback.

2.  PRESENCE OF MULTI-DIMENSIONAL CHARACTER OF AROMATICITY:

As discussed by scientists like Sir Katrizky et al in 1989, 1998, 2001 as well as  Sir Jug and Koster in 1991 extra different indices of Aromatic compounds show different types of divergent orderings as a specific aromatic compound can be more aromatic in one dimension and less in the other one.

This result can be useless because it is not justified and it is really difficult to choose the right dimension in order to find out the stability of a molecule.

3.  AROMATICITY CAN BE MULTIPLIED:

Over the years presence of multiplied organic molecules like hyper- atomic, heteroatomic claro-atomic, three-dimensional aromatic,  super atomic, spherical, cubic, transition state and even doubly-aromatic molecules cannot be ignored and these can we just too much to handle.

Example:  In the case of a compound known as Macrocycle kekulene, it has 12 benzene rings fused together in the form of a hexagonal shape which actually indicated the presence of delocalized pi rings in the form of six independent aromatic molecules linked together as one and according to Sir Hoffman, a molecule which occupies Sigma orbitals and forms a closed group like structure would be called a Sigma aromatic compound.

WAYS TO OVERCOME THESE DISADVANTAGES

1. Make a set of aromaticity tests and keep on designing more and more indicators to improve checking methods.

2. Indices of aromaticity do not always give the correct results and can fail due to the failure of some indicators, thus the multidimensional character of aromaticity is not the best way to consider.

3. Use indices based on different physicochemical properties shown by aromatic compounds.

4. Too many types of aromaticity can be quite hectic so instead of using a complex form of explanations, one should stick to simpler explanations. For example, a Zn-Zn bond can be said to be covalent instead of a metallo covalent bond for simplicity.

It is the most useful test for aromaticity.

Method: Apply a magnetic field to a molecule, we can see that the electrons of the molecules respond to the fields by moving to counteract it.

This experienced field is actually the sum of external magnetic field and induced field but the field at every hydrogen atom is distinct, this difference is known as a chemical shift which does help to identify hydrogen molecules in an organic molecule, making NMR a primary tool in the development of organic chemistry.

This is also more useful as the other methods like magnetic resonance imaging (MRI) is quite expensive. 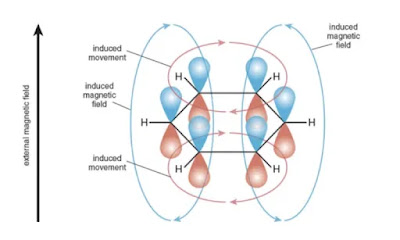 The chemical shift of aromatic protons takes place and aromaticity can thus be identified.

1. There are many aromatic compounds that are not flat Example: boron- hydrogen clusters.

2. There are many molecules that look aromatic but they are not actually aromatic. Example: Borazine is a six-membered ring made up of boron and nitrogen atoms. It can also be called as 'inorganic benzene' but it has 6 pi electrons and follows all the aromaticity rules but it isn't completely aromatic due to less pi current.

The nuclear independent chemical shift (Nics) is the most popular aromaticity detection method.

It is also based on the NMR method, where when aromatic compounds are placed in a magnetic field inside an NMR machine, the pi electrons start moving around the ring forming the aromatic ring currents, this movement also creates its own magnetic field which is perpendicular to the ring when they inform the bagel shape magnetic field that becomes visible due to its influence on hydrogen atoms.

But Nick does not look for the chemical shift of a real atom-like NMR, it actually uses a ghost atom known as Bq which consists of no protons neutrons electrons, it is like a point in the space and is placed in the middle of the ring to act as a sensor for a magnetic moment so then we can just get a single value answer that indicates the presence of aromaticity. The more negative the value, the stronger is the aromaticity. 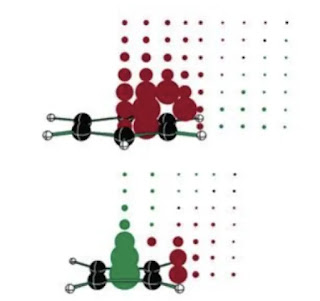 This research showed that besides aromatic Sigma aromatic, the pi aromatic molecule also existed, in some compounds, both of them could be seen and in both cases, the valence electrons delocalised over the molecule.

In order to call a compound Sigma aromatic, defined covalent bonds are mandatory.

In 2020, a molecule known as Bismuth thorium cluster was designed which was proved to be the biggest pi aromatic molecule made from only metal atoms.

Important research by Mobius was made in 2003.

But the one that surprised all the chemists was the first all-metal aromatic in 1995. 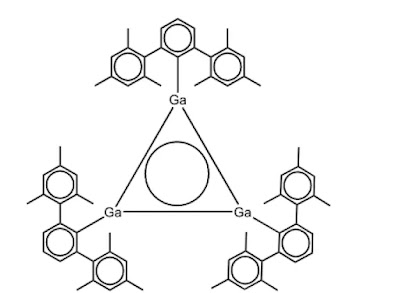 This is a Tri gallium compound made from metals. This breaks the popular myth that organic compounds cannot be formed with metal.

CHALLENGES IN THE FIELD

1. It is necessary to take multidisciplinary approaches, involving multiple disciplines and laboratories, for cracking significant scientific or technological problems. To overcome these issues, organic chemists should communicate with their team and reach a useful decision.

2. Organic chemists should have good knowledge of other fields to understand the whole picture of the project.

3. It gets really difficult for organic chemists the create new organic or hybrid materials so as to develop their field and overcome all the previous issues.

4. with the development of new as well as efficient polymerisation methods capable of exploiting organometallic chemistry and organocatalysis. It makes a huge impact on organic chemists to somehow overcome them.

👉 Frontiers In Chemistry: Why Aromaticity Is a Suspicious Concept? Why? (weblink)
👉 American Scientist: The Many Guises of Aromaticity - By Roald Hoffman (weblink)

Aakanksha Saxena, a graduate student of University School of Chemical Technology, GGSIP University, Delhi. She is pursuing her degree in chemical engineering.

📌  The A - Z of BIOPOLYMERS
📌  Petroleum Industry - An Overview.
📌  Role of Nanobiotechnology in Biopharmaceuticals
📌  Understanding Food Safety