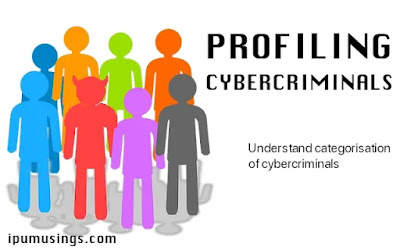 In the past few decades, our world has turned upside down because of the revolution in technology. With the increasing population, engagement in cyberspace has also observed significant changes. The digital world has become one of the greatest sensations of all time and is still evolving at a rapid pace. Internet acts as a multidisciplinary tool that curbs all the geographical and communication limits. The development in the digital platform brings forth an array of new obstacles to the collective safety of the individuals at large and to a country’s economic prosperity. Although cyberspace offers great opportunities and benefits it also manifests our vulnerabilities. The rampant use of the platform has started raising security concerns as activities like data breaches, identity theft; digital robberies are increasing day by day. In 2017, India witnessed a significant jump in the number of cybercrimes where the consumers lost over 1 billion U.S. dollars as per the official records and by the year 2020, India was ranked the second most attacked country in terms of cybercrimes in Asia.

Cybercrimes have become one of the most common and fastest-growing criminal offences in the current era. The development in the trends of the cybercrimes doesn’t focus on individual parties any longer but aim to paralyse huge organisations or financial institutions to gain maximum advantage. In order to find a solution to this issue, it is pertinent to first properly examine and analyse it. The main hindrance that lies in analysing and finding a solution to these cybercrimes is the lack of officially recorded data. At a corporate level, the fear of consumers' frustration and dissatisfaction and tarnished reputation makes them unwilling to report such victimisations. At an individual level many people don’t even realise they have been victimised to such crimes and when they do there lays a lack of awareness of the procedure to find relief from such situations. It is vital to make the consumers aware of the laws and procedures to undergo as soon as they encounter such activities so that the impact of the same can be treated with more efficiency. With the assistance of certain precautions as well as standardised and systematically recorded data, the impact of such activities can be taken under control to some level.

As we engage and connect more to the technology the more vulnerable we become to cyber-attacks. Cyberspace has become a hub witnessing numerous unlawful activities specifically illegal trespassing into computer systems and manipulation or gaining unauthorised access to a person’s confidential data. These cyber-crimes don’t have any fixed way of affecting the consumers and can decipher different ways for fulfilling their desire. The most common ways are-

Amongst these attacks, the unconventional method of creating terror like cyber-terrorism has gained priority by the government agencies including law enforcement and judicial systems. Cyber-terrorism refers to the execution of unlawful or illicit activities by a group to create violence against a person/ property leading to death or bodily injury and even economic loss in furtherance of their political, social and ideological objectives through threat, coercion or intimidation. The threat posed by cyber-terrorism has already made it to the headlines where many people ask how real the threat of cyber-terrorism is and the answer is ‘Very’. The alarming situation created by cyber-terrorism using political, economic, social and psychological factors is getting very serious. The concept of cyber-terrorism has become a more convenient and attractive option for terrorists in the present day to carry out their age-old activities. Cyberspace allows them to have greater coverage, anonymously targeting a larger audience with much ease. These cyber-terrorists hack into the networks of individuals, government, public facilities etc. and look for vulnerabilities to exploit. Cyber-terrorism has become so imminently dangerous that it can bring threat to the regional as well as the nation’s security and has drawn the attention of the higher government and judicial authorities. From a psychological and social perspective, cyber terrorism has become one of the greatest threats to individuals as well as to society at large. Using the power of cyberspace they put national security at the cliff-hanger using the victims as their dummy puppets for creating havoc in the society. 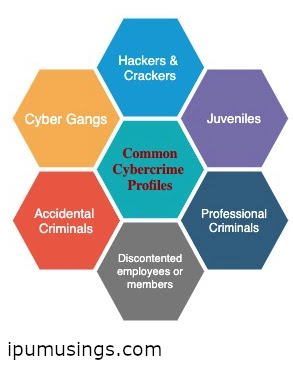 Juvenile criminals: The juveniles are in the present day allured into this dark side of the internet. In most of the cases their intention is not to commit a crime but merely to use the internet for their convenience or to outshine other kids with the thought, ‘if they can, so can I!’ However, the situation is getting out of hand and the juveniles are becoming more engaged in these unlawful activities amongst which cyberbullying, cyber harassment, cyberstalking and hacking are the most common ones.

Hackers and crackers: Hackers are the individuals who gain unauthorised access to a person’s computer network out of curiosity or to gain recognition, reputation and acceptance amongst their peers. Whereas crackers are the individuals, usually modifies machine code to buy past legit buying or computer virus creators who intend to cause loss due to some anti-social motive or just for fun.

Professional criminals: Apart from hackers who intrude into another’s system with an unlawful and illicit motive, some white hat hackers earn their regular income by using their programming aptitude for a lawful reason.

Accidental criminals: Most social media users commit crimes without even realising them. Accidental exposure takes place when the person accessing the same network is negligent and works without due consideration.

Groups (cyber gangs or cyber-terrorists): Many gangs have started exploiting the opportunities available in the digital platform to obtain maximum financial gain with fewer chances of getting caught.

MOTIVE AND MOTIVATION TO THE CRIMINALS

Like every individual, even a cybercriminal does something with a thought in his mind that tempts him to commit such activities against law. Cybercriminals are drawn to such activities because of certain factors amongst which money stands to be the most prominent one. Research has proved that most hackers are educated and highly skilled who engage in such activities for gaining either monetary advantage or to fulfil some self-actualisation needs. In some cases, there may a political motivation or even just the need to prove them in the competition. In all these circumstances the actions of the criminals are in close relation to their psychological mindset and profiling these cybercriminals can give a tip-off to the investigators to prevent them from committing the same offences again and even catch the criminals.

When we use the term ‘crime’ although two acts can be referred to as of criminal nature, their material facts may differ from each other. Similarly, even though cybercrime and white-collar crimes are criminal offences they are still different from each other and sometimes they don’t overlap either. Criminals who commit crimes in cyberspace are referred to as cyber-criminals. However, the term ‘white-collar crime’ is used for crimes that are committed in a non-violent manner by criminals because of their greed to earn any personal or financial gain. Most of the crimes that we witness on the digital platform such as phishing, fraud or identity theft are white-collar crimes as they are non-violent in nature and are financially motivated. But what triggers a person to engage in such activities? Factors such as poor job incentives, unethical behaviour, or passionate yet psychologically deviant and socially awkward nature can tempt a person to lose his ethics and engage in such immoral and illegal activities. The overall impact of such activities is much worse than we can even imagine and can cost the victim loss of millions of dollars. Although technology has made our life more comfortable and sorted its shortcomings can’t be taken lightly.

Traditionally the crimes were committed in physical mode and it was comparatively easier to locate the criminal using computer forensics as initially the criminals were not well versed with the use of the digital platform. However, with the advancement of technology, a substantial increase in the number of cybercrimes has been noted and the government and the law enforcement agencies are undertaking necessary measures to fight this new crime wave. Locard’s famous principle, ‘Every contact leaves a trace’ which means that every criminal leaves a trace of his doing and it is impossible for him to escape the responsibility for his actions. In cyberspace even though there is no physical involvement of a criminal, however, there are ways to track him down by investigating the digital evidence. Using high technology, the computer forensic examiners can navigate the criminal’s steps to a ‘certain extent as the digital evidence is fragile and can be easily accessed, altered or tampered with.

Digital evidence is more than an action; it includes a person’s behavioural and psychological pattern which is used to analyse the character of a person and ascertain his next steps. Every crime is distinct in nature having a diverse and complex side.  Profiling cybercriminals helps in the investigation, identification and then the interpretation of the offender’s personality which paves a way to examine and trace his actions, mode of commission of an offence and then the motive behind the act. The aim behind profiling a criminal is to scrutinise his actions and then use this research as a preventive action to abstain him from committing the same offence again. Profiling is a correlation between a criminal’s actions and his psychological setup. It is a legitimate method to find out the criminal using a descriptive analysis based on the research data where a narrow range of suspects are shortlisted. Profiling acts as a method of identifying the criminal in the form of prediction by examining his personality and behavioural traits.

Research has shown that these criminals are usually-

However, it is important to point out that not always such data can be accurate since human behaviour is subject to changes from time to time. Taking into consideration the exponential growth of cybercrimes, while the technology itself is a major defence to such activities profiling acts as a key agent in catching the real culprit with more efficiency.

With the innovation in technology, the scope and parameter of commission of cybercrimes has also broadened and posed the following challenges in front of the law enforcement authorities to deal with during the prosecution of the criminals-

With the ever-evolving cyberspace, cyber crimes have become one of the greatest concerns of all time. These crimes not only affect the daily operations of an organisation/ individual but also cause damage to their reputation and other assets which can’t be recovered in monetary value. However, as an individual, we can save ourselves from such attacks by taking necessary precautions and reporting to the concerned authorities. The law enforcement agencies should generate ways to make the consumers aware of the cyber laws and the procedures to follow in case they fall into the trap of a cyber-attack. Moreover while investigating they should inspect and examine the digital evidence with utmost care. In addition to keeping a track record of the criminal’s activities, they should also determine the criminal’s behavioural pattern through the profiling technique as it can act resourcefully during the investigation. Even though it is an arduous task to trace the criminal, if all the individuals do their part mindfully the cyber-crimes can be managed and knocked down to a certain level.

👉  Cybercrime To Cost The World $10.5 Trillion Annually By 2025 (Cybercrime Magazine)

👉  The 5 key challenges for law enforcement in fighting cybercrime (Lexology)

1. Cybercrimes Associated with Digital Identity.
The article emphasises why digital identity is a valuable commodity and Cybercrimes associated with it.
2. Digital Robberies - How Vulnerable ATMs Are?
3. HRM Role and Occupational Health and Safety