DIGITAL ROBBERIES -  HOW VULNERABLE ATMS ARE? 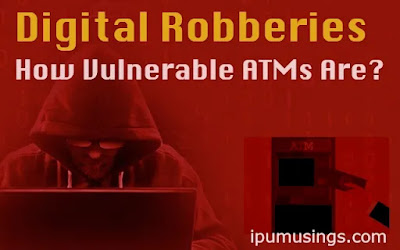 With the rapid innovation in the technological field, there has been a drastic change in our lives in the past few decades. The digital platform has grown wider and quicker than anyone could have ever imagined. Today almost every physical work has been substituted by its digital counterpart and thus, a considerable portion of our routine involves interaction with the digital platform. As it is rightly said, “take the bitter with the sweet’ even though the digital platform grants us ample opportunities and assistance, however, its detrimental actions that follow the ever-evolving cyberspace can’t be ignored. The escalating rates of cybercrimes indicate that cyberspace has become a breeding place for cyber-attacks where the innocent person has been put to the threat.

Although the digital world has provided a new platform for the commission of such offences the basic nature of these offences has not changed entirely. New methods are being introduced by the criminals for the execution of traditional crimes like fraud, identity theft, stalking etc. In 2019 a total of 44,546 cyber cases were registered as per the National crime record bureau in India, with a whopping 63.5% increase as compared to 2018 (27,248 cases). As per the data, 60.9% of the crimes were committed with the motive to commit fraud, followed by sexual exploitation (5.1%) and causing disrepute with 4.2%. Crimes such as bullying, stalking and abetment which previously existed in the physical world have also found their alternate in cyberspace. The greater connectivity and interaction with cyberspace has also increased the number of potential victims of such crimes. A notable example of such crimes committed in cyberspace includes “The Blue Whale”. The blue whale challenge came into recognition as the ‘suicidal game’, where the game revolves for a total span of 50 days. When the victim starts the challenge the platform they use is infected by malware, which gets unauthorised access to the victim’s data which is later used against the victim. Each day the victim is presented with one task and as days pass by, the challenge grows more difficult including mutilating body parts and ends up with the suicide of the victim. If the victim refuses to perform a certain task, he/she is threatened by the administrator with the release of their private information which has been in the possession of the administrator with the help of the malware. 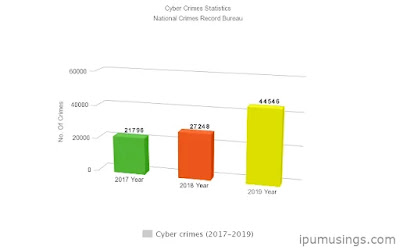 Cybercriminals are drawn to such activities because of certain self-motivating factors amongst which money stands to be the most prominent and compelling one. Research has proved that most of the hackers are young and educated who engage in such activities for gaining a monetary advantage. Since most hackers are either experts or fresh minds, it broadens the scope of cyber-attacks and it is nearly a hard nut to crack when it comes to determining the ways to stop them.

With the advent of digitalisation, many people have opted to go cashless and make most of their transactions by digital means. The new digital era has upgraded the banking facilities to move online. These online facilities also welcome certain drawbacks like threats of cyber-attacks. In the past few decades, it has been observed that not only individuals but financial institutions also are prone to be the targets of such acts. It is evident from a lot of past cases that financial institutions or banks have been active targets for such frauds. The criminal looks for the vulnerabilities or loopholes in the web services and then make a move. Even though the entire degree of the crime can’t be determined necessary precautions should be undertaken by the banks making their online services more secure and reliable.

Another very common attack the banking industry is facing nowadays is a denial of service (DoS). The DoS attacks aim to prevent a person from accessing the website or the server by sending bulk data to the server, so that the server becomes overloaded, paralysed to access or even crash. The hacker can also use multiple devices by infecting them with some malware and then use a bot system to attack the targeted device at the same time. At this point in time, it is difficult to recognise the actual originator because of the multiple devices. After freezing the server, while the authorities are busy figuring out alternatives to resolve the issue, the hacker gets an opportunity to invade the private and confidential information, make unauthorised transactions for their personal gain and engage in identity theft or impersonating as them in front of other organisations. These malicious activities can lead to customer frustration and tarnish the image of the banks and can cause them huge losses. Although the provisions to deal with the same are mentioned in the IT Act, 2008 to find the real offender can alone be an arduous task.

In recent years, an increase in the installation of electronic banking outlets has been noted. They are usually referred to as Automated teller machines (ATMs). ATMs are basically computers with a safe that is connected to the main processing units placed in the banks which keep a track of the transactions made. The internal network administers the ATM’s card reader and the cash stored and dispensed throughout the day. Any person with a credit or debit card can access the service of the ATM and withdraw cash from the bank account anytime easily without the aid of a representative. Just like online transactions the ATM transactions are also hugely popular nowadays and can be traced easily near high traffic areas like shopping malls, airports, banks, convenience stores etc.

Initially, robberies at ATMs were conducted in physical modes, like targeting people who just came out of the ATMs, breaking the machine lock and taking money from the safe or sometimes even uprooting ATM machines using ropes. In the famous ‘Helmet Gang’ case of 2016, the offenders removed the CCTV cameras and disrupt the electrical supply and then broke open the machine with gas cutters and fled away with the money.

With the innovation in technology, the offenders have surely improvised their ways of conducting the offences. The hackers have also paved their way from online transactions to electronic banking outlets (ATMs) without damaging the machine. Some famous cases of such cyber-crimes are listed below-

The cyber-crimes have been taken up to the next level and now the criminals are targeting to draw money out of a large number of devices at the same time. Since 2013, a well-known criminal gang has been committing robberies targeting banks, financial institutions and even e-payment methods using their own developed malware, ‘Carbanak’ and ‘cobalt’ and has stashed around €1 billion around the world. Initially, the malware targeted the bank and ATM networks of transfer. The offenders sent phishing emails with malicious attachments impersonating legitimate organisations. After, opening and downloading the attachments, the malware would spread across the victim’s device and give the criminal access to the internal banking system. It is considered to be one of the most sophisticated and great robberies of all time.

These cases validate that the ATMs have been subject to constant attack by criminals. The offenders also use other attractive ways like –

The offenders have now started using a new tactic of man-in-middle attack, where they snoop in the connection between two parties and impersonates as one of the parties and manifest the whole situation as a normal exchange. They aim to gain unauthorised access to confidential information for committing cyber offences like identity theft, fraud or unapproved fund transfers. Amongst the banking industry, ATMs have proved to be one of the most vulnerable parts. The main reason behind this is because most of these PCs installed in the ATMs are controlled by old operating systems. The use of outdated software like Microsoft or Windows XP makes them vulnerable and an easy target to hackers. Even though the safe containing the cash and the cash dispensing unit is guarded and locked efficiently, the PC screen’s security is compromised. It is merely made of plastic or thin metals and locks which can be easily cracked by hackers. Apart from the wide approach that the digital platform provides us, at one point even the banks are at fault for not taking the necessary precautions to deal with the cybercrimes. In 2019, Bihar reported the highest number of ATM fraud offences with more than 790 cases registered with the authorities and over 2000 cases in the entire country.

The ATMs have become an attractive site for cyber-crimes at a global level. The criminals have figured out alternatives to committing such offences from physical to network-based manner. It is important to realise that these cybercrimes are not localised and have crossed all jurisdictions. The malware that these criminals used to rely on are evolving day by day and the scope of such attack is also increasing proportionately. It is worth pointing out that even though the boundaries can’t be exactly determined, however, a well-designed security plan can go a long way in determining the safety of an organisation’s data.

In order to avoid the financial damage these activities cause to the institutions, the authorities should take into consideration the following –

The rate of cyber-crime is increasing at a very rapid pace and the criminals are also improving their ways to attack different institutions to draw out money or information for their own personal gain and leave undetected. The use of outdated software and weak security system makes the organisation prone to such data breaches. By improving the cyber-security in the organisations they can be protected against the cyber threats that keep hanging around them.

Even though the government and the authorities in charge are making attempts and deploy solutions to prevent the occurrence of such activities by introducing more reliable and secure methods of storing information like Blockchain and cryptocurrencies and the professionals should also take the responsibility to be alert all the time to avoid being a victim to such cyber threats.

1. Cybercrimes Associated with Digital Identity.
The article emphasises why digital identity is a valuable commodity and cybercrimes associated with it.
2.  Social Security Measures and Benefits For Industry Workers in India
3. HRM Role and Occupational Health and Safety