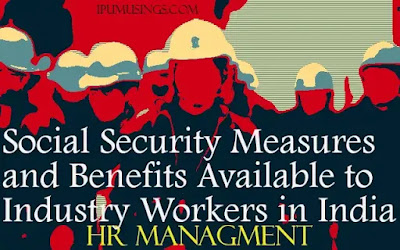 The Workmen's Compensation Act, 1923 provides for payment of compensation to workmen (or their dependents) in case of personal injury caused by accident or certain occupational diseases arising out of and in the course of employment and resulting in disablement or death. The Act was last amended in 1976.

The Act applies to all permanent employees employed: in railways, factories, mines, plantations, mechanically propelled vehicles, construction work and certain other hazardous occupations drawing a salary not exceeding Rs 1,000. The Act does not cover those employees who are in a clerical or administrative capacity or in armed forces, or casual work and to those who are getting a monthly salary exceeding Rs. 1,000. The State Governments are empowered to extend the application of the Act to other classes of persons or diseases also.,
The employer is liable to pay, under this Act, the Compensation in case of personnel injury caused by accident arising out of and in the course of employment.

The Act does not apply to those workers who are covered under the Employees State Insurance Scheme.

The ESI scheme is applicable to all factories and other establishments as defined in the Act with 10 (revised earlier 20) or more persons employed in such establishment and the beneficiaries' monthly wage does not exceed Rs 21,000 (revised) are covered under the scheme. The Act applies to all non-seasonal, factories run with power and employing 20 or more persons. It covers all types of employees — manual, clerical, supervisory and technical

The Maternity Benefit Act aims to regulate of employment of women employees in certain establishments for certain periods before and after childbirth and provides for maternity and certain other benefits.

As per the Act, to be eligible for maternity benefit, a woman must have been working as an employee in an establishment for a period of at least 80 days within the past 12 months. Payment during the leave period is based on the average daily wage for the period of actual absence.

The duration of paid maternity leave available for women employees has been revised from the existing 12 weeks to 26 weeks. Maternity leave of 12 weeks to be available to mothers adopting a child below the age of three months from the date of adoption as well as to the "commissioning mothers". The Maternity Benefit Amendment Act has also introduced an enabling provision relating to "work from home" for women.

The act was amended in 1950, 1951.and 1965. Under this Act two different schemes, i.e., the Coalmines Provident Fund Scheme and the Coalmines Bonus:

These schemes are in the application and have been amended several times. Under the Provident Fund Scheme, the employers contribute 8% of their total emolument to the fund and an equal contribution is made by the employees. In June 1963, a provision was made in the scheme whereby the members are allowed to contribute voluntarily up to another 8% of their emoluments. The scheme is administrated by a Board of Trustees, consisting of equal members of representatives of the Government, employers and employees. A Special Reserve Fund was set up to make the payment to outgoing members. A Death Relief Fund has also been set up to ensure a guaranteed minimum payment of Rs. 750: to the dependents of the deceased whose accumulations in the fund are Jess than the amount at the time of death. The employees Family Pension Scheme 1971 also applies to coalmine workers.

The Act was passed in 1952 covering factories employing 50 or more workers in 6 major industries. viz., iron and steel, textiles, engineering, cement, paper and cigarettes. By an amendment in 1960, the scheme was extended to all factories of five years standing and 20 or more workers.

A SPECIAL RESERVE FUND was made for making the payment to outgoing members. A Death Relief Fund has also been set up for affording financial assistance for the tune of Rs. 1000 to the nominees of the deceased whose pay does not exceed Rs. 500 p.m. at the time of death. The PROVIDENT FUND ACT 1952 was amended in 1971 to provide for the benefit of family pension to the members of the deceased in case of their death while in service.

The Employees Pension Scheme of 1995 generates pension to the employees from the organized category after the age of 58. The pension is calculated based on the pensionable salary and pensionable service. The scheme provides widow pension, child pension and orphan pension as well.

In 1971, this scheme was launched for industrial workers covered by Provident Fund Schemes. The family pension is payable to the unmarried/widowed/divorced daughters above the age of 25 after all unmarried children have attained the 25 years of age or started earning their livelihood whichever is earlier.

The Payment of Gratuity Act, 1972 is an act that provides a scheme for the payment of gratuity to employees working in railways, ports, factories, oilfields, plantations, mines, shops or other establishments and for matters connected therewith or incidental thereto. Gratuity is a sort of retirement benefit.

Under this scheme, employees in factories, mines, oil fields, plantation, ports, railways etc. are entitled to gratuity after completing 5 years of service at the rate of 1/2 month’s wages for each completed years of service subject to a maximum of 20 months wages.

Various state governments and a few Central government schemes are available to senior citizens, the poor and destitute.

ⅰ National Pension Scheme (NPS): The NPS scheme was launched in the year 2004 by the Pension Fund Regulatory and Development Authority of India (PFRDA). This government pension scheme is designed to specifically provide financial security to senior citizens, post-retirement.

ⅱ Atal Pension Yojana (APY):  This government pension scheme aims to provide pension benefits with a minimum contribution per month. The Atal pension scheme is mainly targeted to the unorganised sector and addresses the longevity risks amongst the workers of this sector. The APY scheme encourages the workers to voluntarily save for their retirement by giving minimum contribution on a monthly basis.

ⅳ Indira Gandhi National Old Age Pension Scheme (IGNOAPS): The government pension schemes for senior citizens play a vital role in providing financial security amongst the elderly while also initiating economic development in certain crucial areas of society. Indira Gandhi National Old Age Pension Scheme is one such pension plans in India. The scheme was introduced by the Ministry of Rural Development of India in 2007 and is popularly known as the National Social Assistance Programme (NSAP).

ⅴ Employee Pension Scheme (EPS): The EPF pension scheme was introduced by the government in 1995 and is also called as the Employees Pension Scheme 1995. The EPS scheme was launched by the Employee’s Provident Fund Organization (EPFO) and its main aim is to provide social security to the employees. The old pension scheme provides pension to the employees working in the organized sectors during their retirement i.e., after the age of 58 years.

Compulsory insurance is any type of insurance an individual or business is legally required to buy. The provisions of Industrial and commercial employment (Standing orders) ordinance, 1968 makes it compulsory for the employers that they shall have the group insurance of all the permanent workmen working under their administration against the natural death and disability and death and injury arising out of contingencies. The scheme was introduced by the Central Government with the cooperation of the Life Insurance Corporation and applies to certain groups of workers. The employees contribute certain amount monthly towards the premium. If the member dies while in service, an amount of Rs. 10,000 is paid to the heir of the deceased. The U.P. Government has introduced the scheme for teachers, lawyers and police employees. The Government of Haryana has also taken certain steps.

This scheme was launched on Ist August 1976 for the insurance benefit of employees covered under Employees Provident Fund Scheme, and Coalmines Provident Fund: Scheme. EPFO. The main objective of EPFO behind this scheme was to ensure that the family of members get financial assistance in case of death of the member. This scheme is financed by the Government and the employers.

Note: Ministry of  Labour and Employment is working on The Code on Social Security, 2019 Bill, replaces nine laws related to social security.  These include the Employees’ Provident Fund Act, 1952, the Maternity Benefit Act, 1961, and the Unorganised Workers’ Social Security Act, 2008. The National Commission on Labour (2002) (NCL) had emphasised the need for universal and comprehensive social security coverage to avoid deprivation of basic needs of workers and recommended the simplification and consolidation of existing laws towards this end.

Neha Choudhary is pursuing her BBA LLB from Guru Gobind Singh Indraprastha University, Delhi. She wants to pursue her career in Criminology and Cyber laws.