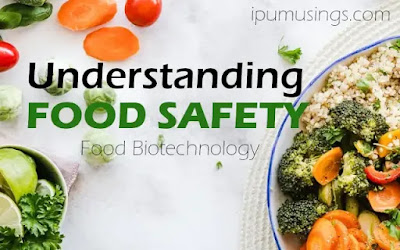 Food is the basic requirement for humans, to which they cannot be denied. Food can become contaminated at any stage of processing, production, processing and storage. Germs can spread from unclean surfaces to food and hence contaminating the food and causing health problems to the food consumer and sometimes it can even be fatal. For the assurance of the protection of food from contaminants, we need to adopt some measures such as food safety.

To be concise, food safety can be termed as the preventive measures taken to protect the food from contaminating substances to give a contamination-free consumption to the food consumers. It relies on the joint efforts of everyone involved from food processing to food packaging to food storage that is involved in the food supply chain. A food is considered to be safe only when it has not lost any of its nutritional value, it is physically, chemically, microbiologically clean.

Diseases caused by food contamination are termed foodborne diseases which can be pervasive, permanent and that can ultimately lead to death. These diseases are a serious threat to international public health safety and economic development. With the span of time and increase in the number of demand, these diseases are increasing at an alarming rate. Every year millions of people die due to these foodborne diseases.

Food safety concern arises due to :

● Undercooking: when a portion of food is delivered to the consumers, they should cook it well so as to prevent any contamination and making the food consumable.

● Improper agricultural practices: Food while processing and packaging are at maximum exposure to the environment, so due to improper practices like inadequate washing, handling with unhygienic conditions can make the food contaminated.

● Inadequate storage: Improper storage of the food under extreme and unhygienic conditions can make the food contaminated which can further spread foodborne diseases, so it is mandatory to store food with preventive measures and under favourable conditions so as to minimize contamination. 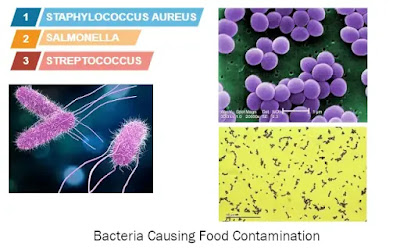 Food contamination is caused by various pathogens which are produced when certain preventions are not taken and these pathogens produce foodborne diseases which sometimes are fatal. There are hundreds of pathogens that are responsible for the same, some of them are listed below:

It is a gram-positive bacteria that is cocci shaped, the temperature at which its growth is favourable is 37 degrees. They mainly reside under the human body, it spreads through human to human contact. It mainly passes from the people that have skin allergies, nose infections via food. This bacteria releases enterotoxins in the food and the main symptoms after consuming the food are mainly nausea and vomiting.

The main food that has a higher risk of containing these bacteria are cooked meat, potato, desserts with milk and chicken and various animal flesh.

It is a rod-shaped bacteria and is favourable to almost every kind of habitat, they can live in water, soil, food plants and faeces of humans. This mainly spreads through the consumption of raw meat or various kinds of animals food. The symptoms from this bacteria almost are seen after 12 hrs and mainly include diarrhoea, fever, abdominal cramps, nausea and vomiting. the food should be cooked at higher temperatures and sanitation should be good.

It is a gram-positive bacteria and nonmotile bacteria. This bacteria mainly resides under humans mouth, pharynx, rectum and secretions and when made contact with the secretion, this can pass and can cause pink eye, meningitis bacterial pneumonia. It is not fatal but proper measures should be taken while preparing the food.

To maintain hygienic kitchen certain measures should be taken:

● A ventilation system should be there

● Warnings are written all over the kitchen

● Drainage should be easy to clean

Now to provide food safety assurance there should be certain systems that overlook the food safety norms and here some of them are listed:

1. HAZARD ANALYSIS AND CRITICAL CONTROL POINTS { HACCP}: It started in the 1960s for producing zero defect products for the US Army and NASA, later it was used as a reference by FDA.

2. ISO 22000: the international organization for standardization started its food safety management system by ISO 22000 whose aim is to check whether the food provided to the consumers is contamination-free or not.

3. FSSAI: food safety and standards authority of India developed under the ministry of health and family welfare in AUGUST 2011, it mainly ensures food safety so that the food provided is bacteria-free or free from any kinds of infections.

Food safety is something which should be there so that the food provided to the consumers is contamination-free and the humans are not denied to their basic right. It plays a crucial role in food assurance so that every person can have assessed to good food, maximum hygienic methods should be taken so as to minimize the risk of contamination.