GRAPHENE A RAY OF HOPE (#chemistry)(#graphene)(nanoparticles)(#defence)(#ipumusings)

GRAPHENE A RAY OF HOPE 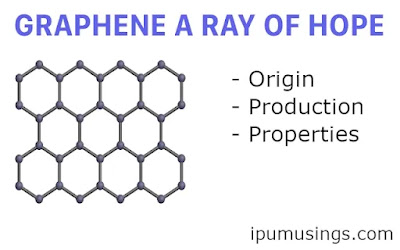 The word ‘graphene’ has significantly become synonymous to ‘miracle material’ as, in today’s advancing technology era this  carbon composite material can be used in any of the field whether it is medical , defence , commercial use or in aerospace field . It is a 2D one atom thick nano-material which has some very unique properties such as it has tremendous tensile strength i.e. 130 GPa and extraordinary specific penetration energy which is nearly 10 times higher than normal steel .Graphene as a carbon composite material is unique because of its  sp2 hybridization structure & it’s extremely thin atomic thickness which is 0.345 nm.These properties make it a  remarkably strong i.e. nearly 200 times stronger than steel as well as an excellent conductor of heat and electricity. The carbon-carbon bonds in graphene are so small in length and so strong that they prevent thermal fluctuations from destabilizing it. In addition to that, the material is extremely diverse and can be combined with other elements including gases and metals to produce different composite materials consisting range of superior properties. Graphene being a carbon composite material is also lightweight and stiff in nature thus making it a potential material to replace the aramid fibre based polymer composites used in armour systems in current scenario. The aim of this research is to study the behaviour of graphene under various extreme conditions so that it could potentially be used in the battle field as body armours or in our defence system .This study will discuss the potential of graphene based non-materials with regard to penetration energy, ballistic performance, flame resistance, electromagnetic interference shielding, electrostatic-charge dissipation, sensors, corrosion protection. The gestalt of defence applications of polymer/graphene based nano-material may offer future perspective to develop promising materials which will contribute in the growth of our country’s defence system.

Graphene was first demonstrated by Andre Geim and Konstantin Novoselov, two physicists from the University of Manchester, in 2004 for which they received the Nobel Prize in 2010. The scientists argued that strictly 2D crystalline materials were thermodynamically unstable and could not exist. It had already been studied theoretically in 1947 by P.R. Wallace as a text book example for calculations in solid state physics. He predicted the electronic structure and noted the linear dispersion relation. The wave equation for excitations was written down by J.W. McClure already in 1956, and the similarity to the Dirac equation was discussed by G.W. Semenoff in 1984.In their initial experiments, Geim and Novoselov extracted graphene from a piece of graphite such as is found in ordinary pencils. Using regular adhesive tape they managed to obtain a flake of carbon with a thickness of just one atom. They pulled graphene layers from graphite and transferred them onto thin silicon dioxide (SiO2) on a silicon wafer in a process called either micromechanical cleavage or the Scotch tape technique. The SiO2 electrically isolated the graphene and weakly interacted with it, providing nearly charge-neutral graphene layers. The silicon beneath the SiO2 could be used as a "back gate" electrode to vary the charge density in the graphene over a wide range .This mechanical exfoliation is the simplest of the preparation methods and surprisingly is the method that made stand-alone graphene a reality.

Graphene was first produced by mechanical exfoliation of graphite. However after so many years passing down and new technology emerging up several methods have been utilized to synthesize graphene sheets .These methods can be categorized into two approaches i.e. bottom-up and top-down with carbon-containing molecules and graphite as initial materials, respectively. There are many considerations to look upon before selecting a method as it could lead to reduce in cost of manufacturing and also the synthesis method can hugely affect the form of graphene product as it can cause several defects. Some considerations are size of sheets, quality of sheets, chemical modification, and compatibility with commercial chip fabrication process. Liquid suspension graphene oxide followed by chemical reduction, liquid-phase exfoliation, epitaxial growth by thermal desorption of Si atoms from the SiC surface, epitaxial growth by chemical vapour deposition on transition metals ,solvothermal synthesis, and unzipping carbon nanotubes are among the reported methods. CVD is one of the most useful methods for synthesizing structural mono or few layer graphene. A graphene with a large area can be obtained by using CVD method by exposing the precursors at a high temperature. The graphene produced using the CVD method is 1.5 times better compared to other methods such as Scotch tape, thermal decomposition, graphene oxide reduction, liquid exfoliation, and even bottom-up method. It is because the graphene single crystal can be produced within 2.5 h when using the CVD method. The graphene single crystal product shows Hall's mobility of nearly 10,000 to 20,000cm2 V 1 S1 at room temperature. This property is compatible to be applied in semiconductor technology, solar cells, and transparent conductive films.

Graphene, the much-hyped 2D matrix of carbon atoms arranged in a honeycomb lattice, is the lightest, strongest, thinnest material known to man, as well as the best heat and electricity conductor ever discovered by human being. This material has a single layer of carbon atoms linked together and it is the basic structure of other carbon allotropes, such as charcoal, graphite, fullerene and carbon nano-tubes. It  has better physical properties compared to other materials, such as high thermal conductivity nearly 5000 Wm−1 K−1 , high electron mobility which is about 250,000 cm2V−1 s−1, high Young modulus values which is approximately 1.0 TPa and  large surface area i.e. 2630 m2 g−1  and better electrical conductivity and optical transmittance.  This carbon composite material is a zero-overlap semimetal with extremely high electrical conductivity as both holes and electrons here act as charge carriers. Normally carbon atoms have a total of six electrons i.e. two in the inner shell and four in the outer shell where the four outer-shell electrons in an individual carbon atom are available for chemical bonding, but in graphene, each atom is connected to three other carbon atoms on the two-dimensional (2-D) plane, leaving one electron freely available in the third dimension for electronic conduction. Several tests have shown that the electronic mobility of graphene is extremely high resulting into above 15,000 cm2/V•s and theoretically potential limits of 200,000 cm2/V•s. Graphene electrons act much like photons in their mobility due to their lack of mass and these charge carriers can travel distances without scattering which is known as ballistic transport. However, the quality of the graphene and the substrate that is used are the limiting factors.

Akanksha Kashyap, a graduate student of the University School of Chemical Technology, GGSIP University, Delhi. She is pursuing her degree in Chemiscal engineering.

📌  DNA and its Applications in Nano-Biotechnology
📌  Precision Medicine: New Era of Healthcare
📌  Nanosensors - A Walkthrough
Posted by www.eduvictors.in at 07:01