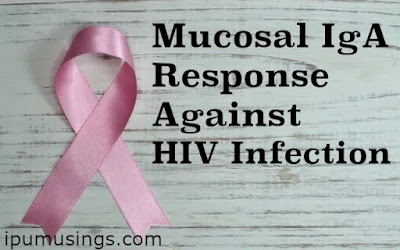 The HIV infected hosts would destroy their T cells and inflicts serious damage to the B-cell department, such as lymphadenopathy, destruction of normal B-cell follicle architecture, and polyclonal hypergammaglobulinemia increased apoptosis of B cells and constantly loss of memory B-cell responses with newfangled HIV disease. B cells and plasma cells are also infected, which results in causing the loss of mucosal IgG and IgA antibodies. Here, we need to know about the basic importance and its major role in the fight against HIV cells. In addition, there are several subclasses of IgA and IgG. Except for their variable regions, all the immunoglobulins within a class have about 90% homology in their amino acid sequences, but only 60% homology exits between classes (e.g. IgG and IgA).

IgA constitutes 10-15% of the total Ig in serum. It is the primary Ig class in external secretions such as breast, milk, saliva, tears, and mucus of the bronchial, genitourinary and digestive tracts. The IgA class of immunoglobulins contains two subclasses: IgA1(93%) and IgA2(7%). Serum IgA has a half-life of only 5.5 days.

The IgA present in serums is predominantly monomeric. The IgA of external secretions, called secretory IgA, consists of a dimer or tetramer with a J-chain polypeptide which is in 15kDa of size and a polypeptide chain called secretory component. Secreted IgA is transported through epithelial cells into the intestinal lumen (commonly a process called transcytosis) by an IgA specific Fc receptor called the poly-Ig receptor.

Basically, IgA is an integral membrane glycoprotein. Here, the secreted, dimeric IgA containing the J-chain binds to the poly-Ig receptor on mucosal epithelial cells. This complex is endocytosed into the epithelial cell and actively transferred in vesicles to the luminal surface. Here, the poly-Ig receptor is proteolytically cleaved, its transmembrane and cytoplasmic domain are left attached to the epithelial cell and the extracellular domain of the receptor, which carries the IgA, molecule, is released into the intestinal lumen. The soluble IgA-associated component of the receptor is called the secretary component. 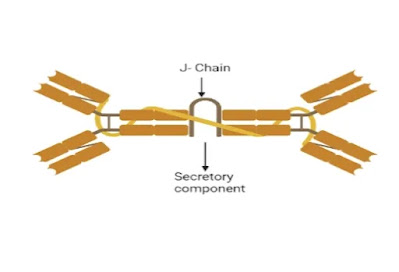 IgA (dimer). It is composed of at least two monomeric IgA molecules, covalently linked through the J chain and the secretory component

The daily production of secretory IgA is the maximum among Ig. It is the major immunoglobulin found in the colostrum of milk in nursing mothers, and it may provide the neonate with a major source of protection against pathogens during the first few weeks after birth.

IgG is the most abundant Ig in serum constituting about 80% of the total serum Ig. There are four human IgG subclasses, distinguished by differences in -chain sequence and numbered according to their decreasing average serum concentration: IgG1, IgG2, IgG3 and IgG4. Except for the IgG3 subclass, which has the fastest turnover, with a half-life of 7 days, the half-life of IgG is approximately 23 days, which is the longest half-life of all immunoglobulin isotypes. The IgG isotype (except for subclass IgG2) is the class of immunoglobulin that can pass through the placenta, enabling the mother to transfer her immunity to the foetus.

Here, IgM is the first class of Ig antibodies that got made by a developing B-cell. It accounts for 5-10% of the total serum Ig. IgM is found on the surface of mature B-cells together with IgD where it serves as an antigen-specific B-cell receptor(BCR). Monomeric IgM, with a molecular weight of 180,000 is expressed as a membrane-bound on B-cells. Here, IgM is secreted by plasma cells as a pentameric molecule, composed of five such units, each of which consists of two light and two heavy chains, all joined together by additional disulfide bonds between their Fc portions and by a polypeptide chain termes as J-chain. The J-chain is synthesized in the B-cell or plasma cell. The half-life of the IgM molecule is roughly about only 5 days. 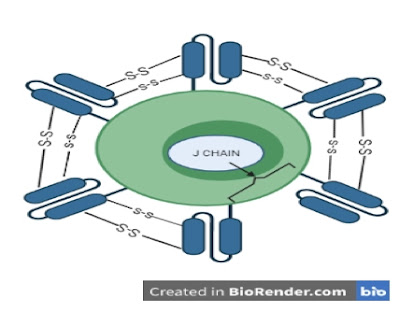 Here, we need to know about the dysfunction of the B-cell department in HIV- infection. It is very necessary to recognize the processes involved in generating mucosal antibodies for different classes in healthy, uncontaminating hosts. Unlike other forms, mucosal contains IgM, IgG, and IgA, especially polymeric versions. IgM-producing cells secrete the multimeric IgM which contains the joining (J) chain and is generally pentameric. This IgM is attached to the polymeric immunoglobulin receptor (pIgR) expressed on the basolateral surface of the epithelial cell barrier.

The pIgR-IgM complexes are transferred over to the epithelial monolayer in the transcytotic vesicles and allow to reach the luminal side through a process that involved proteolytic cleavage of pIgR and the whole process results in the releasement of the secretory component (SC) that remains correlated with IgM, thus, give rise to secretory IgM.

In IgA1, the latter contains 19 amino acids as well as several; O-linked oligosaccharides. In contradiction, IgA2 hinge region is only 6 amino acid long and lack glucosylation. Here, IgA1 molecules have a T-shaped range between fab fragments of approximately 16nm while IgA2 is Y-shaped, and the range between fab regions measures only 10nm.

Among the three classes of mucosal antibodies, IgA in its several forms stands out strongly among others. The normal human produces more IgA per day among all other classes of Igs combined but IgA only stands out second in the plasma concentrations after IgG. The above of all concepts and facts suggested a very vital role for IgA function in a mucosal department.

A VITAL TASK PLAYED AGAINST HIV CELLS BY IgA

In the early stages of HIV infection of T-helper cells 17 population among the CD4+ T cells, which is the main target of primate immunodeficiency viruses. TH17 cells tend to confine preferably to the gastrointestinal tract where they express several genes involved in the maintenance of epithelial cells, including interleukins-22.

Here, the reduction of CD4+ T- helper cell function had given a great impact on Ig class switching in subepithelial B cells, which results in a significant loss of IgG and SIgA in mucosal fluids. The important loss of IgG and dIgA production in the lamina propria to a strong distorting of the IgG: IgM ratio and the dIgA: IgM ratio, with the presence of IgA content of mucosal fluids in HIV infection, is critically impacted. During the extreme HIV infection, there is bacterial translocation occurs, which results in a boost up immune activation and further upregulation of virus replication.

Critically, the possible role of IgA in providing the defence to the normal host against HIV cells has been controversial. Shockingly, there is neither neutralising antibodies nor the cell-mediated immune responses are linked to the lowering of virus acquisition risks. Serum IgG with antibody-dependent cellular cytotoxicity (ADCC) activity targeting the V1V2 regions associated with a wider outcome.

IgA present in mucosal fluids can conciliate the defence by direct neutralization, immune exclusion, or inhibition of transcytosis. In passive immunization, we have observed that regulating of neutralizing dIgA intrarectally prevented SHIV acquisition after intrarectal virus challenge.  Alternatively, large immune complexes could be formed from trapping the incoming virus and prevent it from traversing the epithelial barrier via transcytosis. Such a mechanism is termed immune exclusion.

The main aim of this review was to contribute contiguity between the potential of mucosal antibodies in normal hosts to protect against immunodeficiency virus acquisition and the critically damaged status of mucosal antibody-producing cells in established HIV infections. In uncontaminated hosts, IgA in mucosal fluids can provide prevention against mucosal virus transmission through a process termed immune exclusion.