Applications of Different Class of Aerogels

Aerogel with its wide array of properties and different variety of materials that it’s made from makes it a great contender for not only industrial applications like thermal insulations but also for space missions and environmental cleaning. In the past few decades aerogel has revealed properties like oil water separation which is a very crucial for cleaning of oil spills in oceans. It has found its use in detection of high energy particle in Cherenkov radiation. Silica aerogel has been used in the stardust mission to capture high velocity dust particles and in Mars rovers to cover different sorts of electronic equipment to prevent malfunctioning of electronic equipment at high and low temperature gradients. Different aerogel catalyst helps in effective combustion and esterification. Its ever- growing demand will certainly replace all sorts of insulations from fiberglass to mineral wool with composite aerogels in the near future. Few clothing businesses have opted to use aerogel insulation in the pocket of jackets to preserve the batteries of phone from ultra-cold environment.

Silica aerogel tiles were used to capture comets dusts (in NASA’s stardust mission) which were considered as source of water, organics, and amino acids. The mission had a purpose to bring back dust particles for analysis. The Stardust mission which was launched in 1999 required collector material which would be light, which would have variable density without compromising structural aspects and would be highly resistant to thermal cycling and high UV radiations. The only material which could contribute these properties is Silica Aerogel.

NASA used a Fly by mission, which would mean to travel at a relatively high velocity close to 6-7 km/h to the dust particles. Catching a bullet is difficult but catching it and keeping it intact is a more difficult task. Aerogel comes in the picture to catch the speeding bullets which are dust particles in this case. Particles which had to be collected were of the order of 100 microns. Another reason for using aerogel is the fact that other materials disintegrate faster in space because of high UV radiation, and as there is ultra-cold and ultra-hot environment which leads to thermal cycling which then results in stress and cracks in the organic material, aerogels is really efficient to be used in an environment with thermal cycling.

In order to capture a very fast-moving dust particle the capturing material is required to have a high-density variation [density gradient] without much change in its structural aspects. Aerogel is efficient because of its light weight and space missions takes into consideration on weight of material as it could add to payload hence by making the mission more exorbitant.

Aerogel is employed as a great thermal insulator in pipe in pipe configuration which reduces weight drastically which leads to hazel free laying of oil pipelines beneath the water on the ocean bed. Fiber glass aerogel composite is used as an insulation in oil pipelines. The reduced thickness of aerogel infused fiberglass is the key reason why the laying of pipeline on the ocean bed becomes easier. The reduced thickness results in reduced weight of the whole pipe in pipe configuration. When aerogel is infused with different sorts of materials it yields new class of materials which could be put to use in an array of industrial applications. The reason why it is widely popular is its effective insulation at ultra-cold temperatures which is applicable in refineries, petrochemicals and natural gas plants. It can be used as a fire-retardant material because of its high thermal insulation properties. Aerogel infused with iron oxide in a blanket form is resistant to temperatures as high as 900 degrees Celsius.

When a silica Aerogel is prepared the first main step is to make a silica gel which is then soaked in pure methanol or ethanol for few days, in this case we will use ethanol as a substitute which will occupy the pore of the gel by replacing any water that is left inside the pores. 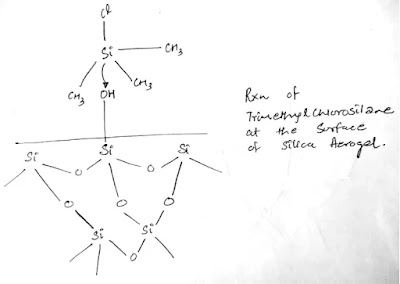 When the gel is fully prepared different ratios of hexane and ethanol solution is prepared and the gel is soaked into them for another one or two days. Trimethylchlorosilane (TMCS)is used for water proofing the gel. The gel when completely prepared has hydroxyl group protruding from the surface which can bind with a polar solvent like water and degenerate the gel. A solution of hexane and TMCS is prepared the percentage of hexane used is equivalent to about 93%. The gels are soaked in TMCS solution and the whole setup is heated for half a day at more than 55 ̊C and then cooled. Fresh TMCS is exchanged and the gels go through the process of heating and cooling again.

When Trimethyl silane replaces the Hydrogen, it bonds with oxygen, makes the surface of silica completely non polar which makes it resistant to water attack. By mere 30-35% replacement of hydroxyl group on the surface of silica aerogels with trimethyl silane the aerogel becomes completely water resistant. These gels are then dried in an autoclave using CO2 at supercritical temperature. The gels obtained are highly water resistant and show identical properties of silica aerogel having low thermal conductivity and high porosity with high surface area. 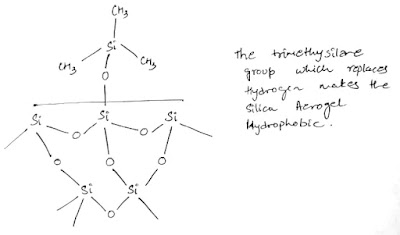 The first method is using an extractor where ethanol is extracted using carbon dioxide from Pd-supported alumina gel. This is catalyst A. The method employed produces an aerogel with high bulk density, low porosity and low surface area. At the microscopic level the structure showed large brick like particles. The catalyst had a very narrow pore size distribution. It is a sapphire crystal and has a corundum structure. 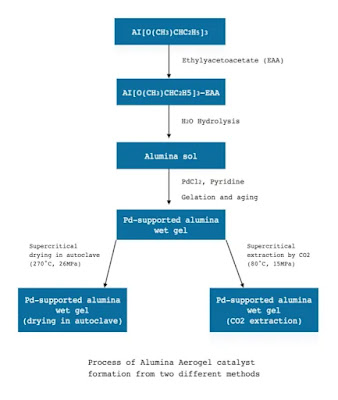 The second way to produce Alumina aerogel catalyst is using an autoclave where alumina gel is super-critically dried using ethanol from Pd-supported alumina gel. This is catalyst B. The catalyst formed has a low bulk density, high porosity and high surface area. At a microscopic level the structure shows long needle like crystal particles which eventually cause high porosity. This catalyst has wide pore size distribution. It has an aluminium crystal structure with AI atoms having both tetrahedral and octahedral coordination.

Palladium chloride is added along with pyridine to both the processes to hydrolyse alumina sol. Pyridine complex is formed which apparently prevents precipitation of palladium while aging of gel is taking place. The activity of catalyst A and B differed when they are used for combustion of methane. Catalyst A has been found to combust methane at lower temperature than catalyst B. The reason could be high surface area of A and less sintering in catalyst A than in B because of their properties.

Hydrophobicity is an important property of aerogels which makes it resistant to water attack and further degeneration. Hydrophobicity is introduced by replacing almost 30% of the hydroxyl group with trimethyl silane and different kinds of aerogel require different agents to make the surface water repellent. Rubber aerogel also need hydrophobicity, they can be made hydrophobic using Methyltrimethoxysilane (MTMS)and rubber aerogel being more compressible and highly absorptive, works better in oil absorption from water. Silica aerogel is not very mechanically strong compared to rubber aerogel so the latter is more effective in oil-water separation. The methods employed to produce aerogel catalyst may affect their catalyst activity during processes like combustion or esterification. Aerogel composites can be used as an insulator on structures that require to withstand negative temperature gradient in a cold environment. The thick fibre material that are used as thermal insulation can be replaced by aerogel composite iron oxide or some other material which can be fused with aerogel. So, the weight of the structure reduces drastically and more efficient insulation is achieved with reduced weight.