Preparation of Silica Aerogels and their Properties (#chemicalegineering)(#ipumusings)(#aerogels)

Preparation of Silica Aerogels and their Properties

Aerogel contains a skeletal structure that has 99% air by volume and in its initial stages, its structure strikes a great resemblance to a gel where water or other liquid is around 95 to 99 per cent by volume held inside the pores with size ranging from 2 to 50 nanometres. If the liquid inside the solid structure is isolated the structure that would be left will be a mesoporous material with low density and high surface area. When a silica gel is dried it leads to the formation of xerogel which happens to form when the liquid inside the pores is dried leaving the solid structure to come together and collapse onto itself. The problem with keeping the solid structure intact and rigid is solved by supercritical drying. Aerogel is a nano-porous and nano-structured class of material consisting of nanoparticles which when observed under an electron microscope would reveal anatomy similar to that of a sponge-like skeletal structure with interconnected particles thousand times smaller than that of a sponge.

Inorganic aerogels such as those made from silica and other metal oxide are dry and rigid materials that are super lightweight. However, the material itself is not very strong and breaks easily under a small magnitude of pressure, which makes them brittle for real-world applications. Silica aerogels make a very similar sound to that of a ceramic or tin when dropped from a certain height. Silica aerogels that are made from basic processes are hydrophilic thus when they come in contact with water, they get dilapidated. 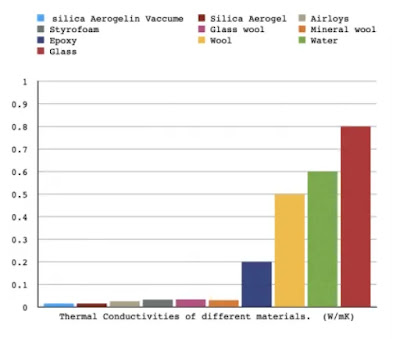 Aerogel takes on its appearance depending upon the material that’s used to create it. Silica aerogels are the most common type of aerogels available. Silica aerogel looks entirely transparent against a light background but on the contrary, when held against a darker background it can be noticed that it has a slightly bluish colour appearance, similar to the fact that the sky is blue. The structure within the aerogel is of nanoparticles size and when these nanoparticle structures scatter light they do so by Rayleigh Scattering which means that the lower wavelengths will be scattered more effectively than a higher wavelength.

According to Rayleigh’s Scattering effect:

Where I is the intensity of scattering and λ is the wavelength of light that is scattered.

So, when an aerogel is held up against the sky it appears to be slightly yellowish for the same reason that the sky looks yellow and orange at the time of sunset, the blue light is scattered out and what comes to our eyes is the longer wavelengths yellow and red. It’s experimentally seen that when a silica aerogel is put under ultraviolet it looks opaque and looks transparent in infrared because it scatters less in the infrared spectrum.

Two Primary steps that lead to the formation of aerogel:

Tetramethyl orthosilicate (is a Silicon Alkoxide) is a great source of silicon and make a silica gel. Its non-polar behaviour makes it difficult to mix with polar solvents like water and the way to bind them both is to add a solvent that would act as a binding medium. Acetone or methanol is used as a binding medium. For the purpose of this experiment, methanol is used as a solvent that mixes with both water and Tetramethyl orthosilicate. 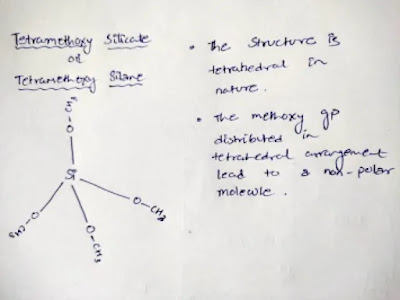 Ammonium hydroxide is used as a catalyst in the reaction which would only speed up the process for practical reasons. A very dilute solution of Ammonium Hydroxide is ideally needed for the process.

i) In the first beaker put x ml of methanol and add (x/2) ml of dilute ammonium hydroxide solution. This will be solution A.

ii) In the second beaker put x ml of methanol and x ml of Tetramethyl orthosilicate (TMOS). This will be solution B. The whole process can be carried out using TEOS instead of TMOS.

The value of x could be from 35 - 40 ml depending upon the batch that will be produced.

Now take another beaker and add solution A and solution B into it and start stirring thoroughly. Stir the mixture for about 40 seconds.

The underlining reaction that is taking place is the hydrolysis of Tetramethyl orthosilicate where the methoxy group is getting replaced with a hydroxy group which in turn is condensing water by reacting with another hydroxy group attached with silica. The hydroxy group if reacts with another methoxy group would condense out methanol which would be then called alcohol condensation. These molecules condensing out water and methanol lead to the polymer structure where there is a high amount of branched linkage which would lead to a fragile network of silica. 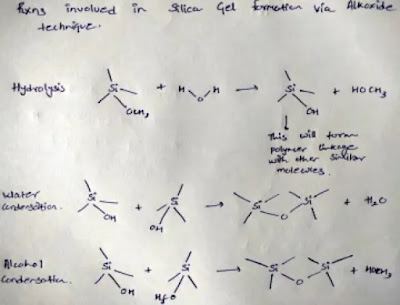 The gel is then put in moulds to give the desired shape. Gels then could be put in a methanol bath which would eventually replace all the water from the pores and the methanol has to be exchanged every day so as to be certain that no water is left in the pores of the gel. This gel would eventually become aerogel after the process of supercritical drying.

This step of the process comes right after the Gel is well soaked in methanol and does not contain any amount of water in its pores. The most common liquid used for Supercritical drying is liquid CO2. Liquid CO2 can be converted into a gas without vaporising it. This happens when the liquid CO2 is brought to its critical point and the layer between liquid and gas disappears. The liquid CO2 then can’t be distinguished with its vapour form and it lies in the region of supercritical fluid.

The gel is first put in a methanol bath in an autoclave so that it wouldn’t dry while the vessel is pressurised. When the gel rests in a methanol bath then liquid CO2 is introduced in the autoclave it is done over a course of few hours so that it mixes slowly with the methanol. The resulting aerogel’s structural aspects could get affected by the speed with which this process is carried out. Too quick filling of the autoclave chamber with CO2 could lead to an exchange of fluid inside of gel to be spontaneous which would result in the stress on the gel structure and would eventually lead to cracks on the surface of the gel. The reason why Methanol is used as an intermediate is because of the fact that liquid CO2 doesn’t mix very well with water.

When the mixture of both methanol and liquid CO2 is let to rest for an hour. The methanol being denser could be taken out from the chamber from the bottom of the autoclave. The process of draining out methanol should be really slow because while methanol is being taken out CO2 comes out in the form of gas and this process is repeated until all of the methanol is extracted that was used as a bath for the aerogel. After this process had been carried out the methanol in the pores of the gel has now been replaced by liquid CO2. 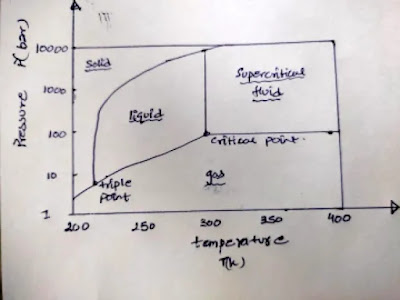 When the mixture of both methanol and liquid CO2 is let to rest for an hour. The methanol being denser could be taken out from the chamber from the bottom of the autoclave. The process of draining out methanol should be really slow because while methanol is being taken out CO2 comes out in the form of gas and this process is repeated until all of the methanol is extracted that was used as a bath for the aerogel. After this process had been carried out the methanol in the pores of the gel has now been replaced by liquid CO2.

In order to take CO2 to its critical point which is achieved at 31 degrees Celsius. The autoclave is then put into a hot water bath so that the heating could be normalised on all sides. The temperature on the gauze is checked and as soon as it reaches its critical point the liquid CO2 becomes Supercritical fluid which is also called a gas-liquid hybrid. It’s important to heat the liquid CO2 slowly so that the gel doesn’t break when the gas expands.

The CO2 is then vented out of the autoclave and while it’s been done the Supercritical fluid CO2 changes to gas rather than changing to a liquid. As CO2 gas does not have surface tension it leaves the gel without causing any dampening in the skeletal structure of aerogel. This also solves the problem with any capillary action that causes the skeletal structure to collapse onto itself when a liquid leaves its pores.

After CO2 becomes a supercritical fluid, it has a density of a liquid but expands like gas, can fill its container like gas and can be depressurised like a gas. According to data on the critical point of CO2, the required temperature is 31 degrees Celsius and the Pressure is around 1050 Psi to make CO2 a supercritical fluid.

The aerogels when obtained from supercritical drying are bluish in appearance when observed under a dark background. The different properties of aerogel are affected by the gelation time and the appearance is mainly affected by supercritical drying if executed without any errors can lead to crack free aerogels. Evenly and slow heating on all sides of the autoclave is required. Aerogels obtained from this process are hydrophilic in nature and can get easily damaged if they come in contact with water. Using TMOS is a very classic method that was used to prepare aerogels, with more advancement in this field TEOS is used instead of TMOS because it is less hazardous and much cheaper than TMOS.

2. Preparation of Silica Aerogel from TEOS.

3.Synthesis and characteristics of silica aerogels.