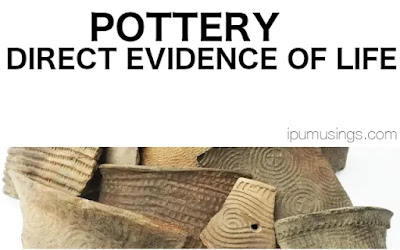 The earth is strewn with fossil remains of extinct species. Pottery in an archaeological context most often concerns the fragments, or sherds, of ceramic vessels, but archaeological ceramics also include such things as drain tiles, roof tiles, ossuaries, coffins, stands, lamps and figurines, many of which lie in the precincts of vessels only in a broad framework. The enormity of the archaeological artefacts places a constraint on recovering the past, however, the excavated sherds and fragments themselves become a sherd of the past and thus act as a lens providing a clear insight into the past.

Pottery, the first synthetic material humans created, an artificial stone, combines the four basic elements identified by the Greeks: earth, water, fire, and air. Pottery has transformed a broad range of human endeavours, from prehistoric cuisine to the twentieth-century aerospace industry. The term “ceramic” traces its roots in the Greek keramos, which are dubs as “burned stuff” or “earthenware”; it describes a fired product rather than a clay raw material. An air of uncertainty circumvents around why ceramics become important when they did in human history. Ceramics is a subjective term, its range differs vis-à-vis discipline. In archaeology earthenware, terracotta, stoneware, porcelain, and other materials made from fire clay and transformed/hardened by heat is termed ceramics. Diasporic trends amid nomadic communities might be a crucial factor in escalating the importance of ceramics—a fragility susceptible to break easily makes them difficult to be carried around, thereby easily being discredited among the mobile hunter-gatherers. In addition, certain foodstuffs, particularly seeds and grains, may be most effectively processed and consumed when cooked with water, and ceramics are very effective for such food preparation techniques.

Pottery has been tremendously important in archaeological research for over a century owing to its abundance and indestructibility. It is a succinct compendium of technical, artistic, cultural, and economic choices. The choices directly reflect on the status quo ante and reveal significant details of prevailing circumstances and trends. Archaeologists and antiquarians quickly recognize that variations in ceramic forms and decoration were restricted in space and in time. Environmental variability stimulates evolution and is of fundamental importance from an archaeological perspective. Temporal or spatial variability suggestively affects the competition dynamics in populations and gives rise to disingenuous interpretations. Spatial variations could be used to clearly discern and characterise different prehistoric regions, whereas temporal variations could be a stepping stone in outlining chronological sequences within those regions.  Ceramic use and manufacture emerged individualistically in many parts of the world, and the knowledge of techniques for producing the ceramics were exchanged among societies, thereby explaining the significance of these relics as a cornerstone. A consolidation of the ubiquity and excellent preservation of pottery in archaeological contexts, directly makes them the most common materials that archaeologists recover in research.

Pottery answers some of the most sought after questions in a very detailed manner. The details of chronology, trade networks, and/or the technology of the settlement from which they were recovered are just the surface of facts that can be unravelled with the help of ceramic artefacts.

BASIC OBSERVATIONS MADE FROM CERAMIC ARTEFACTS 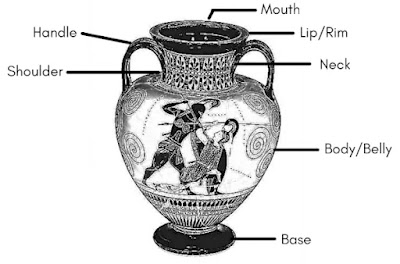 Fig. Anatomy of a pot 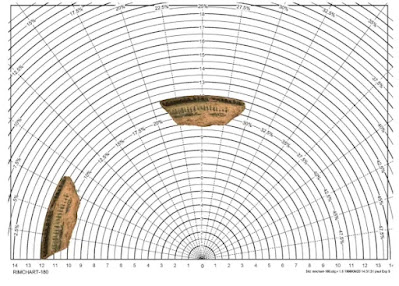 Fig. Use of a diameter chart to estimate the diameter of circular rims or bases as well as their maximum horizontal preservation as a percentage of a full circle. 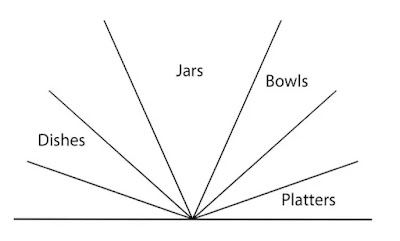 Fig. A simple template for classifying vessels by the degree of “openness” for whole and reconstructable vessels.

The provenance of an artefact refers to the origin, the source and can be the place where it was found in the excavation, an indispensable piece of information; the term might refer to the place of manufacture. Discovering such information can unravel evidence that can lead to an understanding exchange and interaction among past human groups. Traditional ceramic studies classify pottery by its physical characteristics, such as form, fabric, and decoration. These attributes can be so exclusive and distinguishable that often the shape of the vessel can be discerned with the help of a sherd. Pottery characteristics metamorphose and can often be a trademark, representing a particular region. Advanced analytical techniques prevent unnecessary hassle and give unparalleled accuracy. Some of the techniques are as follows:

Owing to its ubiquity, abundance and durability, pottery has been a trusted window to peek into history. Once excavated, analysis (destructive or non-destructive) of the relics can be done post-reconstruction. Various measures to ensure the safety of evidence are taken. The minutiae are extremely important in order to answer archaeologically significant questions regarding ethnography, use and activity distribution, social and political organisation, etc.