ARCHAEOMETALLURGY: IN PURSUIT OF ABYSS 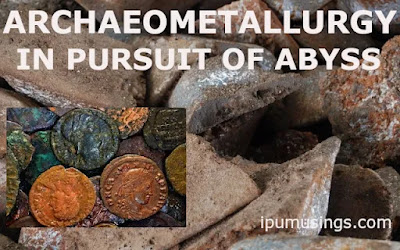 Archaeometallurgy is a carefully embedded filigree of a gallimaufry of archaeology and metallurgy. The range of raw materials that humans use for food, construction, valuables, transportation, and other purposes is enormous and perplexing. The clink of metals in the numerous battles fought, documented and undocumented, echo in the chaos demarcating today. Buried in the depths of the earth since times unmemorable, archaeological metal artefacts undergo changes that alter the entire structure of the metal and alloys. In essence, archaeometallurgy deals with all aspects of metal starting right from its production and distribution to its usage.

Metal and metallurgy-related artefacts are sundry in their diversity. Apropos metallurgy, ancient human activity has been recorded under three main types of evidence: metal as raw lumps and spills, semi-finished products and objects for repair or recycling, and remains of tools and installation, such as crucibles, hammers, tongs, furnaces or hearths. These exploit the different metal properties perceptible in antiquity, such as colour, density, malleability, hardness or rarity. The analysis of metal objects brings an understanding of the extent of its exploitation, or if it has gone through any modification, which brings an insight into levels of metallurgical knowledge and the relative importance of these factors regarding the society producing the object.

Archaeological studies coalesced with the meticulous metallurgical examination are required to understand the evolution of technology in the past and to suggest their conservation pathway from various degradation. A strict division rules out the primary production of metal from the manufacturing of artefacts. Mining, beneficiation and smelting are placed under primary production. This bifurcation necessitates expertise in specific minerals, their relevant properties, such as colour, hardness, smell, mechanical behaviour under stress, chemical behaviour at high temperatures and so on, and a thorough acquaintance with the necessary associated materials, such as fuel, technical ceramics and fluxes. Archaeological evidence is primarily contributed by waste material such as slag, furnace and crucible fragments. Whereas, manufacturing requires an obligatory understanding of the behaviour of metals and alloys, over a range of temperatures from cold to fully liquid, combined with the artistic skill required to make both the purposeful as well as picturesque entities desired by clienteles.

The journey of a metal artefact starts from ores. The process can be captured in two major steps: mining (the extraction of the piece of rock from the ground), and smelting (chemical transformation of metal compounds like, alloys and other minerals, to metals; involves firing at high temperatures). It can be gathered from archaeological evidence that the ores used in ancient smelting processes were far from pure metal compounds. Archaeometric analysis and the archaeological reconstructions of the artefacts found in archaeometallurgical sites to an extent make up for the lack of any direct accounts of the metallurgical operations.

Reconstruction of ancient human activities concerned with metalwork such as its organization and specialization can be done by exploiting the data of slag analysis. Though it is common knowledge that to a degree the minerals of ores contribute to the characteristics of metal obtained from smelts.

Solemnly the scarcity of archaeometallurgical evidence limits an in-depth understanding, yet the results of the analysis are only as reliable as the sampling stratagem allows them to be, and with artefacts, this can sometimes just be as imperative as the examination itself. Analysis of metal artefacts and debris can:

Metals are made up of crystals called grains. The physical properties of metals are affected only moderately by the size and shape of these grains and largely are governed by the material comprising them. In pure metals the task is not very meticulous, contrariwise in alloys, which are an amalgam of metals and of other elements, the grains can root from either a pure element, or a chemical compound made from the alloying element, or a mixture of these. Each possible composition is discretely known as a phase. One of the most useful impetus to the study of ancient metals comes from the equilibrium/phase diagram. Alloys do not have a sharp melting point rather they soften in particular temperature zones and are shown on the phase diagram as solidus and liquidus curves. Different phases have different physical properties and each contributes towards the characteristics of the resultant metal. An understanding of the properties of a particular metal and the history of its manufacture may be gained by investigating the structure and constitution of the grains and phases of metals.

It is plain to humblest knowledge that when any metal object is excavated from archaeological sites they are in very corroded and unstable conditions. The most alarming deterioration in metals is inflicted due to chemical damages. These damages are perpetrated by the chemicals derived from both inorganic sources and the activity of biological organisms that have registered an omnipresence in the environment. A metal can undergo two types of corrosion: dry corrosion, and aqueous corrosion. After polishing when left exposed to a dry atmosphere metals rather become dull and tarnished, owing to the oxygen and/or pollutants attacking the surface. The resulting oxide films superficially corrode and protect the core of the artefact. Aqueous corrosion demands assistance from moisture. Moisture is most prevalent as water vapour under normal atmospheric conditions. Where moisture is present, corrosion processes escalate the complexity to involve electrochemistry.

Certain problems can arise when it comes to visible corrosion products since the colour of such products can be enormously altered and are to an extent somewhat ambiguous. The analysis is needed to identify any metal or surfacing revealed. Metallic artefacts were generally cleaned using chemicals or by employing electrolysis. This step involved completely eliminating all the corrosion products to reveal the metal below, also called stripping. If corrosion products are stripped off, significant archaeological evidence within them, such as initial surfaces, metallic coatings, traces of ancient lacquer or other surface treatments, decayed enamels, etc., would vanish resulting in inaccurate analysis.

Radiography rather bends heavily towards conservation than towards archaeometallurgy. In spite of this, it is a tool that facilitates a clear perception of fabrication techniques and is a vital herald to sampling iron objects. It comes in most handy with excavated coins that are radiographed to enable the first-stage identification and to enable the order of cleaning and conservation time. Radiography is employed for the characterization of an object and to understand both its technology and cultural context.

The term “tomography” has been derived from the Greek word ‘tomos’ which means cut/section. Tomography is an analytical technique that involves imaging three-dimensional (3-D) structures by slicing a 3-D object into a series of two-dimensional (2-D) pieces (tomograms) that are parallel in nature. X-ray computed tomography (CT), a form of computed tomography, is all about computationally processing a series of X-rays that are taken at different angles into a three-dimensional representation of an object (volume).  Micro-CT is a non-destructive technique, that doesn’t demand any sample preparation, staining or thin slicing. It easily becomes ideal for prehistoric artefacts, as one can examine the internal micro-structure from all angles, devoid of any damage inflicted on the sample.

It is a way to address questions of metal source by characterising metals according to the initial elemental profile present on the basis of composition and matching this with prior data gathered from either objects or mines of known origin. However, owing to dynamically progressive knowledge of metallurgy, it became clear that any trace of chemical fingerprint in an ore became irreversibly altered during smelting, and that subsequent processes only introduced further variations. Chemical analyses alone fail to provenance metals due to nonuniformity in chemicals in ore deposits.

Low-magnification microscopy, similar to the application in tomography is an essential precursor to any detailed study or analysis.  Optical microscopy of polished sections of metal objects, a widely sought after technique in traditional metallurgy, was used extensively in the premature days of archaeometallurgy. It is known to produce high-resolution images of the physical structures, in the form of micro-point chemical analyses and two-dimensional (2D) chemical maps of the surface being studied. Pseudonyms like electron microprobe analysis (EMPA), scanning electron microscopy (SEM), scanning electron microprobe with energy dispersive spectrometry (SEM-EDS), and SEM with wavelength dispersive spectrometry (SEM-WDS) have emerged as well with evolving technology. One big advantage of energy dispersive analysis combined with SEM (SEM- WDS) is that the speed of the analysis is such that 2D chemical maps of the surface can be effortlessly produced at once, giving out details of the distribution of elemental inhomogeneities inside the metallographic structures.

Pb204, Pb206 and Pb208, the ratios of the three main isotopes of lead, depend on the geological age of the lead ore and remain impervious to smelting or any subsequent refining. For metals, this offers a way of tracing metals containing traces of lead in the minuscule amount to their geological origin. Conventionally, thermal ionization mass spectrometry (TIMS) has been used for this. By the combination of lead isotope ratios and trace element patterns, it is possible to derive the relationship between metal artefacts to specific ore deposits. Rather than keeping a track of each isotope individualistically, it is hassle-free to record the results as ratios of one isotope to another. Along with the chemical composition of an object, the isotopic composition of some, or all, of the elements in that object can be derived using this analysis.

Ancient relics are known to be noteworthy shreds of evidence of regional technological advancement of any region. Everything that exists is already fraying at the edges, and in transition, subject to fragmentation and to rot. The corroded, long forgotten, deep buried artefacts narrate a tale of their legacy. While dealing with something as damascene as prehistory, there are no direct sources of information, and the material evidence is insufficient and is seldom retrieved bereft of any contamination, which of course is heaved upon due to successive exploitation in later periods. Therefore, the investigation of prehistoric archaeometallurgy is an enthralling and often thought-provoking task, aimed to reconstruct the links between ore deposits, mining activities, ore treatment, and metallurgical sites.