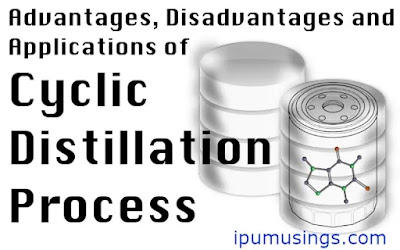 Process Intensification (PI) in distillation columns, in the case of the cyclic mode of operation, has significant advantages, in terms of increased mass transfer efficiency and reduced costs of operations, over the classical process along with a few limitations and challenges. This article aims to scrutinize the characteristics of cyclic distillation and examine its range of application in modern mass transfer technologies. 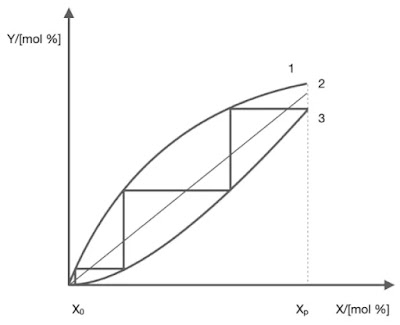 The mathematical model discussed in the article [introduce the link for the previously submitted article “Mathematical models in cyclic distillation”] has several advantages over the conventional steady-state mode of operation. To name a few, the separation efficiency is independent of the diameter of the column. Since the amount of liquid holdup in a tray remains constant while only cyclic frequency is changed, the load of the column does not increase the resistance of the hydraulic operations. The consequence of secondary self-evaporation in the liquid can be noted. The separate movement of phases (SPM) in the mass transfer technology encompasses more degrees of freedom which interject a better process control. [³]

The major economic advantages of cyclic distillation, observed both theoretically and experimentally are: [⁴]

The major technological benefits of the cyclic mode of operation include: [5]

The cyclic mode of operation has certain limitations most of which account for problematic applications to vacuum systems and separation of the vapour liquid periods which critically affect the performance enhancement of the process. However, the introduction of sluice chambers has eased the use of simple trays for vacuum applications. [⁷]

Fig. 2 Design for Cyclic Distillation: Trays with valves and sluice chambers below them.

A noteworthy breakthrough was achieved in recent times in the design of trays precisely for the operation of cyclic distillation. These trays engage the use of valves and sluice chambers positioned under the trays. When the valves are closed during the vapour flow period, the liquid stays on the tray after which the valves are opened in the following liquid flow period and the liquid in the trays flows down to the sluice chamber in absence of vapour. When the next cycle begins the sluice chambers open and the liquid from trays flow to the ones below them. This arrangement eradicates the complexity of using a large number of trays. [⁸]

The earliest design and simulation models of cyclic distillation came up long before the computing powers were efficient and inexpensive which in turn affected the accuracy of the outcomes of the model. These models only took into account binary mixtures and included major assumptions to simplify the operation such as a linear vapour-liquid equilibrium, insignificant condenser holdup and infinite reboiler. In the later studies, these assumptions were replaced with a more realistic approach. Moreover, recent developments were made in the model to incorporate noniterative design algorithms which could be applied to non-binary mixtures with non-linear valour-liquid equilibrium. [⁹]

Up until now, cyclic distillation has been majorly used in the food industry especially for concentrating alcohol. However, the application range is broadening to other industries, such as petrochemicals, biofuels, oil refining, chemistry, pharmaceuticals, etc. Moreover, cyclic distillation offers new prospects by applying fundamentals similar to those of the cyclic operation mode to other intensified processes, such as dividing-wall column (DWC) or catalytic distillation (CD). Nowadays, cyclic distillation technology is employed in stripping columns, tray dividing wall columns and rectification columns, with diameters ranging from as low as 400 to 1700 mm. [¹¹]

In petroleum refining, the cyclic distillation technology is primarily used in high-quality narrow fractions during vacuum / atmospheric distillation of petroleum; high-quality fractionation of gas; combining reaction and distillation processes (catalytic distillation); second refining of all types of petroleum cracking; obtaining isomers of high added value: mesitylene (1,3,5-trimethyl benzene); 1,2,3-trimethyl benzene; iso-durol (1,2,3,5-tetramethylbenzol); durene (1,2,4,5- tetra-methylbenzene) and others. However, there are some conceivable limitations of the process such as in crude oil processing the liquid overflow on the tray is limited to 30 m³/m²hr. [¹⁵]

Esha Chatterjee, a graduate student of University School of Chemical Technology, GGSIP University, Delhi. She is pursuing her degree in chemical engineering. She wants to build her career in Industrial Chemistry and biotechnology.

📌 What is Cyclic Distillation?
📌 Fabrication of Nanosensors
📌 Classification of Aerogels