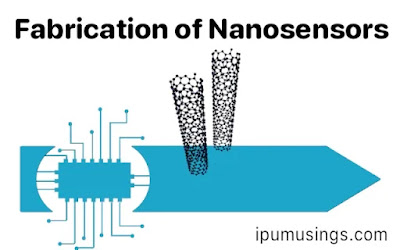 The electrochemical properties of nanomaterials are of great interest especially for the designing of sensitive sensors for the assay of any pathogen, biomolecule, or pharmaceutical components.

Many factors are considered while choosing an apt base (nano)material for the synthesis and fabrication of the sensor. Carbon-based, metal and polymer-based nanomaterials are favoured for the design of nanosensors due to their excellent characteristics such as high surface area, strength, high conductivity etc.

Many nanomaterials are available for the synthesis of sensors such as-

Fullerenes are spherical and hollow nanostructures that are made of sp2 -hybridized carbon atoms with 12 pentagons and n hexagons with a total equation of 20 + 2n carbon atoms. There are many types of fullerenes e.g., C20, C36, C70, C96, C60 of which C60 is widely used. Integration of the fullerenes in biosensor fabrication can be easily achieved with the help of the biocompatibility of fullerene-C60 for the various types of biomolecules.

The earlier method of production of fullerene was done by irradiating a laser beam on a graphite rod in an inert medium however this method failed to produce fullerene in adequate amounts for industrial purposes. Other methods include ablation of graphite in inert gas media. This is a top-down approach. During the laser irradiation of graphite, materials are evaporated, and their vapours are converted to plasma. Upon cooling, the vaporized atoms combine and form fullerene. Other methods are arc discharge and the nonequilibrium plasma method.

Chemical laser ablation, electrical discharge, and chemical vapour deposition are a few methods for the synthesis of carbon nanotubes.

Multiwalled CNTs (MWCNTs) and single-walled CNTs (SWCNTs) could be fabricated through the arc discharge method. The disadvantage of this method is that little control over the arrangement of the nanotubes is possible, also purification of the produced nanotubes is essential due to the presence of catalyst required in synthesis.

Carbon nanotubes are functionalized to make them selective for the analyte of interest based on molecular recognition interactions between the two.

Carbon nanotubes (CNTs) act as scaffolds for immobilization of biomolecules or target analytes at their surface and combine several exceptional physio-chemical, electrical, and optical characteristics properties, making them one of the best-suited materials for the signal transduction for analyte recognition.

Methods for graphene synthesis such as micromechanical cleavage, liquid-phase exfoliation and chemical vapour deposition synthesis are in practice recently. In Micromechanical cleavage, graphite is simply placed between sticky tapes and repeatedly peeled off layer by layer. This procedure results in the formation of atomically pure and flat monolayers remaining on the surface of the tape, which could be dissolved in acetone and then deposited on an oxidized Si wafer. In the LPE method, graphite particles are dissolved in a solvent and the ultrasound is applied to the mixture, which results in simultaneous creation and collapse of micro-scale bubbles. Prolonged use of ultrasound may result in smaller graphene particles.

Recent studies on graphene as a sensor material have shown immense promise as one having exceptional detection speed due to its unique 2D structure and high permeability to water and has been advertised as an “Ultrafast graphene sensor that monitors your breath as you speak”.

These structures find use as gas sensors and also as biosensors for the detection of diseases.

There are many procedures for the fabrication of metal oxide-based nanosensor materials like Coprecipitation, Sol-gel, microemulsion, and solvothermal methods. In Coprecipitation methods a salt precursor (chloride, nitrate, etc.) is dissolved in a solvent such as water and with help from a base, the oxo-hydroxide form is precipitated. To gain control over the size and other morphological properties, surfactants and some non-chemical methods are advisable. The sol-gel method on other hand is a low-cost simple method, has been used extensively for the fabrication of metal oxide structures and provides good control over the shape and size of the produced products. In addition, the sol-gel process also finds its use in the biomedical area such as drug delivery, sensor applications, pharmaceutical synthesis due to the purity and quality of the yields.

Metal NPs and their nanocomposites as electrochemical sensors are widely applied in the application of pharmaceutical analysis.

By making the Metal-organic frameworks (MOF) from different metal atoms and organic linkers, it is possible to create materials that selectively absorb specific gases into tailor-made pockets within the structure, thus making target specific nanosensors. One example is a thin film of a tailor-made MOF, coated onto an electrode, that forms an electronic sensor that could detect traces of sulfur dioxide gas.

In general, there are four methods for producing polymer NPs, are

(1)Direct mixing -In this method the NPS are first dissolved in a solvent and then added to a polymer solution matrix, and the resulting mixture is extruded by a hydraulic press to obtain thin plates.

(2) In situ polymerization method- In this method polymerization of the polymer bed is carried out in the presence of NPs and the monomer encompasses filler particles during growth.

(3) Sol-gel method -a colloidal solution (sol) is obtained by dispersing solid NPS into a monomer solution and the polymer NP network followed by polymerization reactions.

(4) Intercalation method is also in use.

PNPs possess some distinctive properties such as

(4) strong adherence toward electrode surface as well as mechanical flexibility and good biocompatibility.

Owing to these marvellous properties of the polymer-based nanomaterials these are being used widely for ultrasensitive, trace level chemical, and biological nanosensors.

📌 Highly sensitive and selective SO2 MOF sensor: the integration of MFM-300 MOF as a sensitive layer on a capacitive interdigitated electrode

📌 Imanzadeh, H., Bakirhan, N., Sınag, A. and Ozkan, S., 2020. Methods for design and fabrication of nanosensors and their electrochemical applications on pharmaceutical compounds. Nanosensors for Smart Cities, pp.31-61.

Anushka Singh, a graduate student of the University School of Chemical Technology, GGSIP University, Delhi. She is pursuing her degree in chemical engineering.

📌  The A - Z of BIOPOLYMERS
📌  Role of Nanobiotechnology in Biopharmaceuticals
📌  Nanosensors - A Walkthrough
📌  Graphene - A Ray of hope
Posted by www.eduvictors.in at 08:09