What is Cyclic Distillation? 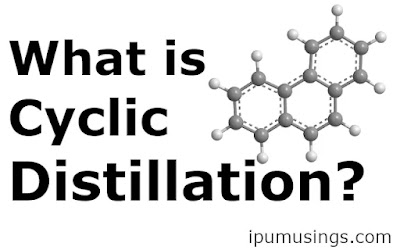 The conventional distillation process can be highly energy consuming with limited separation of components. To increase the effectiveness and efficiency of the overall process, certain Process Identification techniques can be used. One such technique is cyclic distillation. This article aims to have a brief overview of cyclic distillation and its principles of operation.

In industry, several changes are equipped in a conventional process to increase the efficiency of the process and also to decrease the costs of running that process. These modifications for the enhanced performance of the operation are known as Process Intensification.

Process Intensification (PI) is a set of innovative principles for enhancing the driving forces and synergistic effects in a process to dramatically reduce the size of a plant needed to achieve a production objective; to increase the production capacity within a given equipment volume significantly; to reduce in energy usage per ton of product and to cut in the formation of wastes and/or by-products. (2)

Another route for process intensification in distillation is cyclic distillation that we aim to discuss in this paper.

Cyclic distillation consists of alternating vapour and liquid flow periods as demonstrated in figure 1 below. This means that when the vapour is flowing upwards through a distillation column while the liquid is stationary (known as the vapour-flow period), followed by the movement of liquid downwards through the column after the vapour flow has been stopped (known as the liquid-flow period). This is different from the conventional distillation process as the latter involves a simultaneous flow of vapour and liquid phases upwards and downwards a distillation column respectively. In cyclic distillation, the upwards flow of vapour prevents the liquid from coming down. In the absence of a rising vapour, the liquid holdup in a tray flows down to the one below it through the perforations in the tray into a slice chamber located below each tray, under the influence of gravity, which means that there is no requirement for down-comers in this process.

Consequently, the plates used in the process are much simpler and thus cheaper than those in the conventional process. It can be established using experimental data that the throughput of the controlled cycle mode of operation in a distillation column is twice as that in the conventional operation, sometimes even more. (4)

Fig. 1 Design for Cyclic Distillation: Trays with valves and sluice chambers below them (5).

The cyclic mode of operation, which can be achieved with specific internals, is based on separate phase movement (SPM), a term synonymous with the cyclic distillation process, that captures the phenomenon of the process. This has some major advantages such as increased column throughput, reduced energy requirements, and better separation performance (exceeding 200% Murphree efficiency). (6)

The Murphree vapour efficiency of a plate at any instant of time is assumed to be constant and equal to the local point efficiency. At the same time, the effective plate efficiency based on the liquid-phase plate compositions is usually significantly greater than the point efficiency. This leads to the improved separating ability achieved in controlled cyclic operation. (7)

The cyclic operation can be achieved by the following methods or a combination of methods which have been briefly discussed here:

Controlled cycling is a widely preferred scheme because it is the simplest form, in terms of both the construction and the operating points of view. The equipment employed is the same as in conventional distillation viz. shell, trays, condenser, and reboiler. The length of each period is regulated by a cycle timer and an automatic valve in the vapour line exists between the reboiler and the distillation tower. (8)

The stepwise periodic operation uses trays fitted with an inlet and an outlet which are typically opened and closed by on-off valves, and a side reservoir large enough to contain one tray’s holdup. The trays are completely emptied, even in the absence of down-comers, through their outlet directly into the reboiler. During the vapour-flow period, the condensate is sequentially collected in the reservoirs. At the end of the vapour-flow period, the reboiler is emptied of the bottom product and is replaced by the contents of the trays which are in turn replaced by the content of the reservoirs. Then, a new cycle begins. In a stepwise periodic operation, the liquid flow is directly manipulated, which circumvents the hydrodynamic problems that occur in columns operated in the controlled-cycling mode. (9)

Stage switching consists of several vapour nozzle stages and employs the use of a reboiler and a condenser which are connected by a complicated pipeline network and on-off valves. A cyclic change in the network structure is obtained by opening and closing relevant valves. The stages are placed randomly below the condenser and above the reboiler which improves the flexibility of the system at the expense of complexity and the need for thermal insulation. (10)

A combination of controlled cycling and stepwise periodic operation may also be used.

A cyclic distillation column looks from the outside just like a regular tower although on the inside it is different from a regular tower based on the absence of down-comers and the presence of different internals that allow an efficient SPM in practical operation. (11) 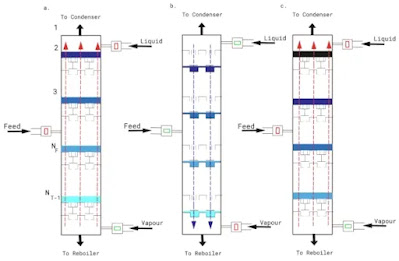 In figure 2 above, the cyclic mode operation shows the alternating vapour and liquid flow periods. The colour of the liquid becomes lighter as one moves down the column, which is used to indicate the liquid-phase concentration change from tray to tray. (13)

[1] Dutta, B. Principles of mass transfer and separation processes.

Esha Chatterjee, a graduate student of University School of Chemical Technology, GGSIP University, Delhi. She is pursuing her degree in chemical engineering. She wants to build her career in Industrial Chemistry and biotechnology.

📌 Heterogeneous Catalysis - A Walkthrough
📌 Graphene - A Ray of hope

📌 Carbon Capture and Storage - An Overview