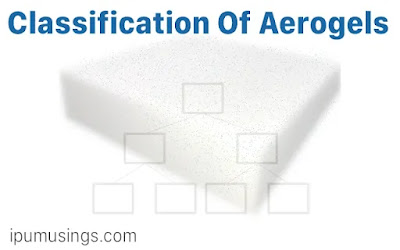 Aerogels can be classified as organic and inorganic based on the primary material used in their formation. Carbon aerogels have delved into the field of energy as efficient energy-containing material with a surface area beyond 2000 m²/g. Aerogel’s application expands beyond the field of energy and is used as a source for the separation of oil-water dispersion. They can be a potential material for the separation of crude oil from water during oil spills which not only damages marine life but also causes economic loss. Each class of aerogel have their specific property which makes them suitable for particular field task such as organic aerogels are mostly applied in the energy sector and gas absorption whereas inorganic aerogels are used as thermal insulators, in aerospace missions and natural gas plants. 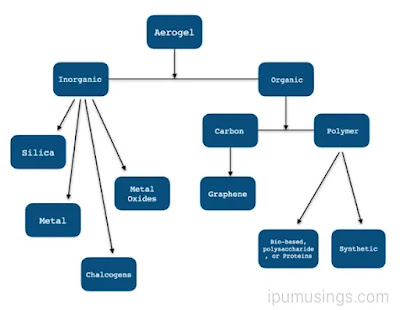 S. S. Kistler a chemical engineer developed Aerogel from gels in the early 1930s and studies the basic characteristic properties of silica Aerogel which were high porosity, low thermal conductivity and high surface area and since then aerogels have proved to be material of great research interest. Aerogels were made from all sorts of materials ranging from metallic oxides to cellulose and different elements. This seems to have facilitated a new research area for aerogel in all different fields. Largely Aerogels can be classified into two subcategories organic and inorganic aerogels more bifurcation of these two categories will reveal aerogels made from materials like polysaccharides, melamine, graphene, cellulose, metals and chalcogens etc. With further increase in numerous methods applied to prepare these aerogels, the traditional method namely supercritical drying in an autoclave is extortionate and tedious we look at newer, more cheap and feasible methods such as freeze-drying and Ambient Pressure drying to be employed in aerogel preparation. 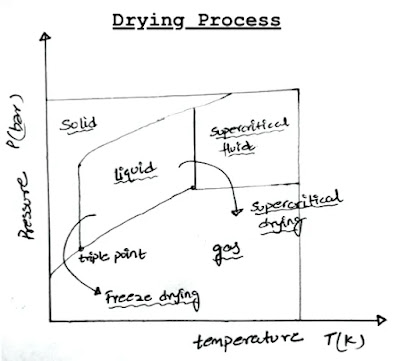 Silica aerogel was the first kind of aerogel to be synthesized and experimented with. Silica aerogels are made from silica sol-gel and drying is achieved using an autoclave where supercritical drying is employed to extract the liquid out of the pores of the gel without affecting the structure of the gel. CO2 is used as an exchange liquid that can convert from liquid to gas having negligible surface tension and is the reason why the sol-gel structure does not collapse when CO2 is removed from the pores of the gel during the drying process. This process involving an autoclave is not feasible at an industrial scale and to obtain silica for silica sol-gel preparation toxic precursors like Trimethoxymethylsilane have to be used.

To prepare Silica aerogel an alternative method could be applied that uses bagasse ash which is available in abundance and is a source of silica. Silica can be extracted from bagasse using this method: a small amount of bagasse ash is dispersed in sodium hydroxide and the mixture is stirred while heating. The mixture is cooled at room temperature and is filtered, the by-product is sodium silicate which is then used to prepare silica sol and further silica aerogel. To introduce hydrophobicity trimethylchlorosilane, hexamethyldisilazane and ammonium are added to sodium silicate while stirring constantly and sol-gel is left to age for several hours. Ammonium hydroxide is added to speed the reaction. The sol-gel is further treated with proof ethanol and then dried at ambient pressure for a whole day at about 80 ̊C. The aerogel obtained had a high surface area and had high porosity these factors are affected by gelation time, solvents and precursors used. 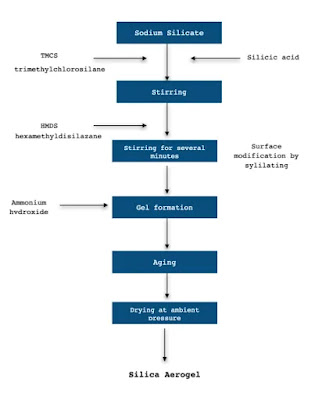 Metal oxide aerogels are not the easiest to prepare, similar to the preparation of silica aerogel an alkoxide is needed to prepare its metal oxide aerogel. Once metal alkoxide is obtained its hydrolysed and hydroxyl group come together to condense and form metal-oxygen- metal linkage and further to sol formation of metal oxide. Aerogels made through this procedure are not a monolith and lack optical transparency unlike those made of silica alkoxide.

Another method could be Gelation using epoxide which results in stronger aerogels and is much easier to produce than the above method discussed. The steps will follow as:

Using nitrate salt of metals and adding it to distilled water. An aqua complex of that metal would form and after adding epoxide which would reduce the complex and get protonated itself. Now metal- hydroxyl species would condense to form a metal-oxygen-metal bridge which would be a metal sol. Further supercritical drying could be employed to exact metal oxide aerogel. Different metal oxide aerogels are available such as vandia, chromia, alumina, titania, zirconia, iron oxide and samarium oxide etc. Similar to silica aerogel metal oxide aerogel impart colour because their metal oxides are present in a different colour. But silica aerogel imparts colour because nanoparticles inside the aerogel scatter the shorter wavelength which gives it the blue colour.

Chalcogenide aerogels are of great significance since they are not only mesoporous, light but they can transport gaseous species efficiently. CdS (Cadmium sulphide) is used as a photo-resistor which changes its resistance when the intensity of light exposure on it changes. Few chalcogenides aerogel made are of sulphide of elements such as zinc, cadmium and germanium. Their application exceeds that of silica aerogels because of their material properties; they are used in photovoltaic cells and photocatalysts However they can’t be prepared through the classic sol-gel technique. Chalcogenide is made using the primary step as the formation of nanoparticles then gelation and at last supercritical drying using CO2.

Organic aerogels differ from silica aerogels in mechanical stability and rigidity. Organic aerogels can be made from different formaldehyde, epoxides, and polyurethanes and polyimides.

Resorcinol formaldehyde (RF) aerogels are easily available materials to make carbon aerogel. RF can be made through the polymerization of resorcinol with formaldehyde with the addition of water. Potassium carbonate is added to speed the process and the resorcinol formaldehyde is left to form polymer linkage and then form nanoparticles which would disperse in the solution forming linkage and hence gel. The gel is left to set for 36 hours at around 80 ̊C so that nanoparticles can crosslink properly. The sol-gel is thoroughly soaked in ethanol and the alcohol is changed frequently. Supercritical drying is applied using CO2 in an autoclave. High- density aerogels are mechanically sturdy material whereas low-density aerogels can’t retain their shape when a small magnitude of force is applied to them.

Resorcinol Formaldehyde aerogel is the primary material to make carbon aerogel. RF is heated at temperatures as high as 1000 ̊C in an inert environment of argon. The polymer is pyrolyzed leaving behind carbon aerogel. To maximise the surface area of carbon aerogel it is treated with steam at 1000 ̊C the carbon in the aerogel pores reacts with H2O and hydrogen to form gas which eventually leading to a higher surface area of 2500 m²/g.

Since aerogels hold high surface area and have high absorption capacity for oil its use in oil separation from oil and water dispersion during oil spills sheds light on its mechanical stability to be reused and its retention properties after each cycle of use are some of the behavioural characteristics that hold importance in the study of absorption of oil via polymer foam aerogel. 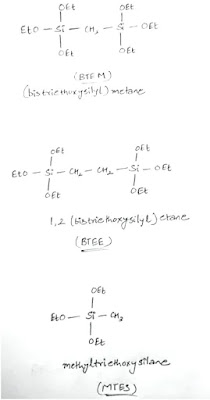 To produce a polymer foam having silica aerogel in their interstices that would have high surface area for oil absorption and be flexible during mechanical stretching. The primary steps would be the preparation of silica sol-gel and pouring the mixture into the foam that would be absorbed by the polymer foam. Once the gel is completely soaked, it is then thoroughly washed with ethanol a few times. Hexamethyldisilazane [HMDZ] is used as a precursor to making the polymer aerogel hydrophobic. The interstices of foam are 90% occupied by silica aerogel. If we compare the hydrophobic nature of pure foam and that of foam aerogel provides higher resistance to absorption of water because of its high angle of contact with water droplets. Foam aerogels could be made from different foam materials namely polyimide [PI], melamine-formaldehyde [MF] or polyurethane [PU]. The measurement of the contact angle of water on different foams and foam aerogels gives absolute data on how they differ in their capacity to absorb water. 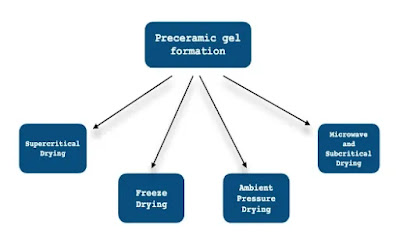 While the field for aerogels is expanding newer type aerogels are being produced and the subclass for organic and inorganic is expanding. Carbon aerogels are being made not only from RF aerogels but can also be synthesized through different means such as from coir fibre and phenol. Organic aerogels can be made from cellulose, carbon nanotube and biochemicals. Inorganic aerogels find their use in the form of aerogel composites.